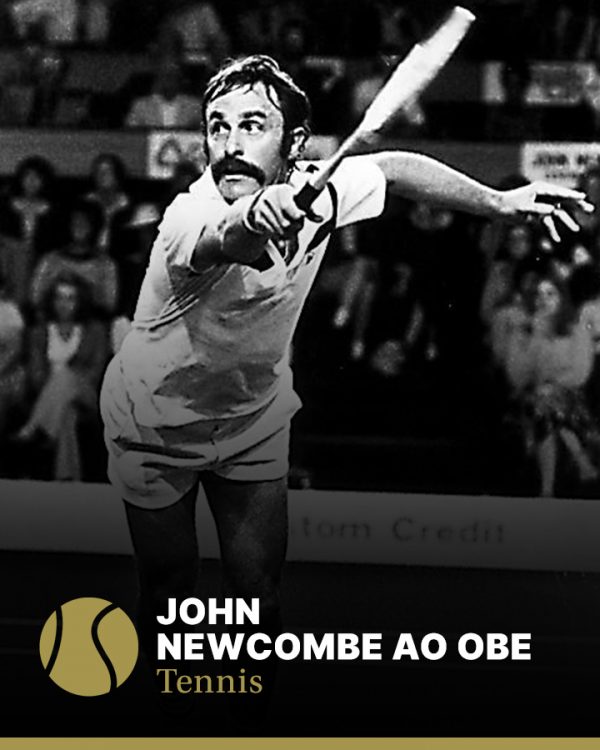 John Newcombe AO OBE was inducted into the Sport Australia Hall of Fame in 1985 as an Athlete Member for his contribution to the sport of tennis and was elevated as a Legend of Australian Sport in 2014.

Newcombe was the last of the Australians to dominate international tennis in the 1950s and 1960s. In his 1979 autobiography Jack Kramer, the long-time tennis promoter and great player himself, included Newcombe in his list of the 21 greatest players of all time.

He was more interested in other sports as a youngster. Not until he was 17 did a career in tennis appeal to him. But he was powerful, athletic and extremely competitive, and Australian Davis Cup Captain Harry Hopman was glad when Newcombe turned his full attention to tennis. In 1963, Newcombe, at 19, attracted international attention as one of the youngest Australians ever to play Davis Cup, selected for the final to play singles against the US. Though beaten by both Dennis Ralston and Chuck McKinley during a 3-2 US victory, Newcombe served notice that he was a player to be reckoned with when he pushed Wimbledon champion McKinley to four hard sets in the decisive fifth match.

Newcombe helped Hopman win four Cups, 1964 to 1967, and then returned to Cup play in 1973, when the pros were reinstated, to be part of perhaps the strongest team ever, alongside Ken Rosewall, Mal Anderson, and Rod Laver. In the 1973 final, Newcombe and Laver were overpowering. Both beat Stan Smith and Tom Gorman in singles, and teamed to crush Smith and Erik van Dillen in the doubles during a 5-0 Australian victory that ended the five-year possession of the Cup by the US.

Newcombe was the Australian junior champion in 1961, 1962 and 1963 and won his first Grand Slam major in 1965 by taking the Australian Championships doubles title with fellow Australian Tony Roche. That same year, the duo won the Wimbledon doubles title, signalling the start not only of an extraordinary string of major titles for Newcombe but also for the two of them as a unit.

The grass surfaces favored his game and the French Open’s clay surface was the only major singles championship he never won. Overall, he won 25 Grand Slam major titles in singles (7), doubles (17), and mixed doubles (1).

Newcombe’s serve, forehand and volley were the backbone of his attacking game, and was at its best on grass. His heavy serve was possibly the best of his era. To the delight of fans, and the surprise of his opponents, he frequently came up with a second-serve ace. His play made him the number one amateur in the world in 1967. As a pro, he was the world number one player in 1970, 1971 and 1973.

It was in singles that Newcombe made his name. He was a two time winner of the Australian Open, 1973 and 1975, a three time winner of Wimbledon, 1967, 1970, 1971, and the US Open twice, 1967 and 1973. Newcombe and Laver are the only players to ever win both the US Open and Wimbledon men’s singles titles as an amateur and as a professional. Newcombe was the last amateur champion at Wimbledon in 1967.

As member of Lamar Hunt’s, “World Championship Tennis” professional tour group, and part of the players union, he was banned by the International Tennis Federation from competing in the 1972 Wimbledon championships and he boycotted the event in 1973. Very popular with the fans, Newcombe’s absence resulted in urgent negotiations that ultimately resolved the issues. He served as President of the Association of Tennis Professionals in 1977 and 1978.

Newcombe was one of the first to sign a contract to play World Team Tennis (with Houston) in 1974, his presence helping give the new league credibility, although he played just that one season. His best pro season was 1971, when he won five of 19 singles tournaments on a 53-14 match record. He totaled 73 pro titles, 32 in singles, 41 in doubles, and won $1,062,408.