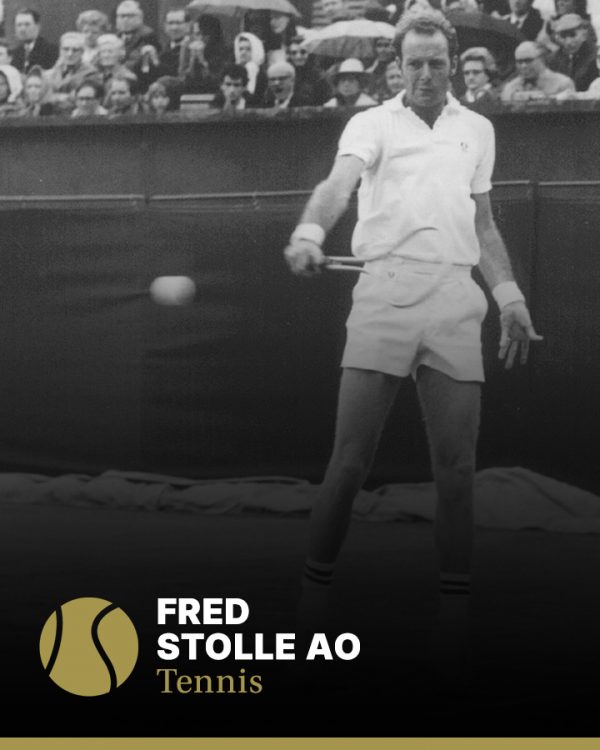 Fred Stolle AO was inducted into the Sport Australia Hall of Fame in 1988 as an Athlete Member for his contribution to the sport of tennis.

Fred Stolle had his Wimbledon singles frustrations, but overflowed with success everywhere else as one of the overpowering Australian group in the 1960s and 1970s. He was known as “Fiery Fred” or “Fiery” to his teammates for his outspoken competitiveness.

He became known as the “Old Hacker” at the US Championships of 1966. A proven grass-court player for some time, member of winning Australian Davis Cup teams, and three times Wimbledon runner-up (1963, 1964, 1965), he was outraged on arriving at Forest Hills, fresh from winning the German title, to find himself unseeded. “I guess they think I’m just an old hacker,” he said, almost 28. Then he proceeded to win the title, the second unseeded man to do so, over unseeded John Newcombe, 4-6 12-10 6-3 6-4, chortling, “Well, I guess the old hacker can still play a bit.” Stolle had lost the 1964 US Championships to Emerson 6-4 6-2 6-4.

As a member of three victorious Australian Davis Cup teams, 1964, 1965 and 1966, he scored his most memorable win the first year in the Cup round at Cleveland, 7-5 6-3 3-6 9-11 6-4, over Dennis Ralston. Down a break in the fifth, with his side trailing 2-1, Stolle pulled it out so that Emerson could win the Cup-lifting clincher over Chuck McKinley. Perhaps his lead-off win in the following year’s Cup finale meant more since it was in his hometown, Sydney, and he had to dig himself from a very deep hole to beat the Spanish ace, Manolo Santana, 10-12 3-6 6-1 6-4 7-5, to send the Aussies on their way.

Stolle worked as a teaching pro, was player-coach of the title-winning New York Apples of World Team Tennis in 1976 and 1977, and of Australia ten times in the now disbanded World Cup against the US, from 1970 to 1979.

Fred has been a commentator for Channel Nine at Wimbledon since 1979 and with ESPN in the USA. He is also president and founder of Grand Slam Sports Marketing, a company owned by ten other Grand Slam tennis champions.

In 1985 he was inducted into the International Tennis Hall of Fame at Newport, Rhode Island, USA. Stolle was made an Officer of the Order of Australia (AO) in 2005 for service to tennis as a player, coach and media commentator, and to promoting Australian sport and culture internationally.