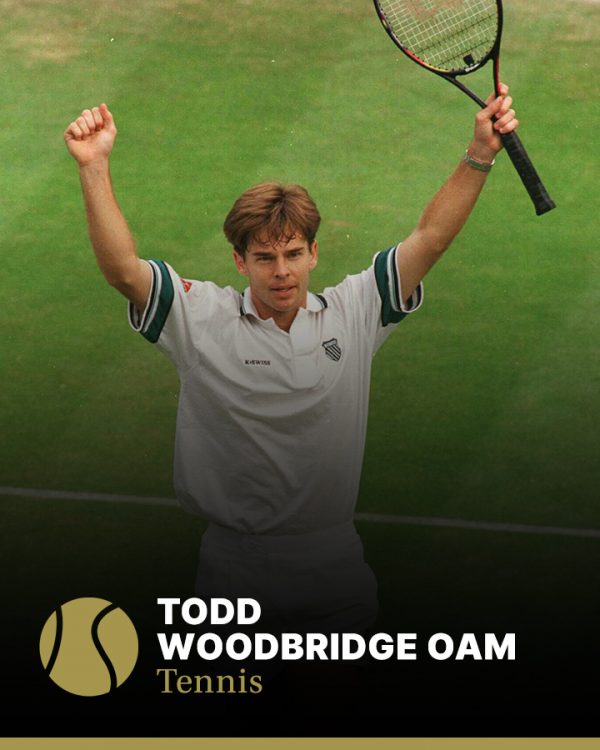 Todd Woodbridge OAM was inducted into the Sport Australia Hall of Fame in 2008 as an Athlete Member for his contribution to the sport of tennis.

Woodbridge will be long remembered as one half of the “Woodies” partnership which dominated men’s doubles tennis throughout the nineties.

Together with long-time doubles partner Mark Woodforde, Woodbridge won six of eight Wimbledon men’s doubles finals played between 1993 and 2000, as well as two US Opens, two Australian Opens and one French Open, Olympic gold in 1996 and silver in 2000. He went on to win three more Wimbledon doubles championships, a US Open and another Australian Open title partnering Jonas Bjorkman – giving him the incredible tally of 16 men’s doubles victories in Grand Slam events.

Importantly he represented Australia 32 times in Davis Cup ties, the most appearances for his country by any Australian tennis player.

Such an awesome doubles records inevitably overshadows his singles success, yet his world singles ranking climbed as high as 19 when he reached the semi-finals at Wimbledon in 1997, going down to Pete Sampras. He also represented Australia in singles at the 1992 Olympics in Barcelona.

The Sydney-born right hander turned professional in 1988 but it was when he teamed up with Mark Woodford as a doubles combination in 1991 that the world really began to take notice and in January 1992 they notched up the first of their Australian open titles. The following year they began their remarkable run of Wimbledon titles .

By the time mark Woodforde retired from international tennis in 2000 the duo had recorded 61 ATP victories and won a gold medal at the 1996 Atlanta Olympics.

Woodbridge announced his retirement in 2005