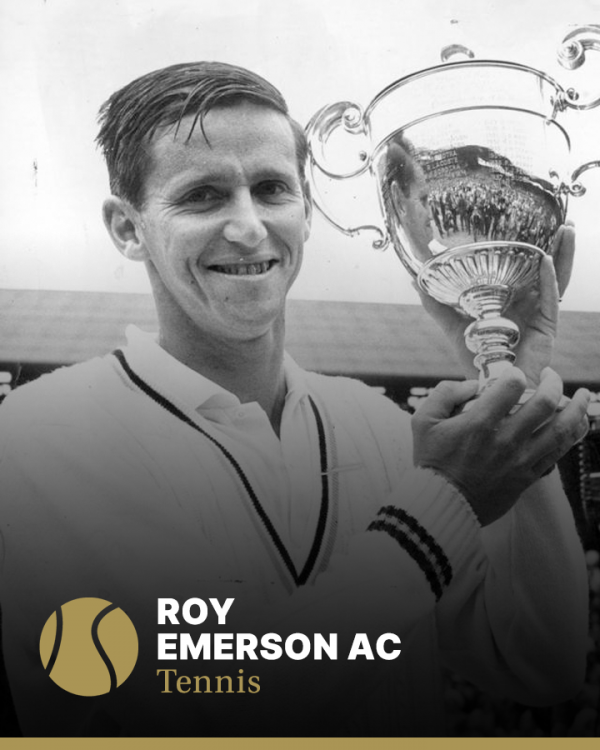 Roy Emerson AC was inducted into the Sport Australia Hall of Fame in 1986 as an Athlete Member for his contribution to the sport of tennis.

A native Queenslander, Emerson is rated second only to Rod Laver as the greatest tennis player ever produced by the state. As a champion schoolboy sprinter, he brought great speed and agility to the tennis court. A right-handed serve and volley specialist, his dedication to training and fitness served him well throughout his career.

Emerson won the Wimbledon singles championship twice in a row, in 1964 and 1965 and was a hot favourite to become the first player since Fred Perry to win Wimbledon three consecutive times. An untimely shoulder injury, suffered when he crashed into an umpire’s stand during his fourth round victory, cost him his chance for further Wimbledon success in 1966.

Early in his career, the teenage champions Lew Hoad and Ken Rosewall overshadowed him, but when both turned professional, Emerson moved easily into the highest levels of the amateur game.

Emerson and Fraser also paired up for the Davis Cup doubles victories of 1959, 1960 and 1961. Emerson was a member of the Australian Davis Cup team from 1959 to 1967, winning 36 of his 40 singles matches. He played in eight winning Davis Cup teams – a record run of success.

Emerson turned professional in 1968, just before the beginning of open tennis. From 1959, he was ranked in tennis’ world top ten nine straight times, including the number one ranking in 1964 and 1965. In 1978, he played alongside his son, Antony, with the pair winning the US Hard Court Father-and-Son title.
A vibrant figure in Australia’s golden tennis age, whose career so successfully bridged the transition of tennis from amateur to open, was inducted into the International Tennis Hall of Fame in 1982 and was Inducted into The Sport Australia Hall of Fame in 1986.