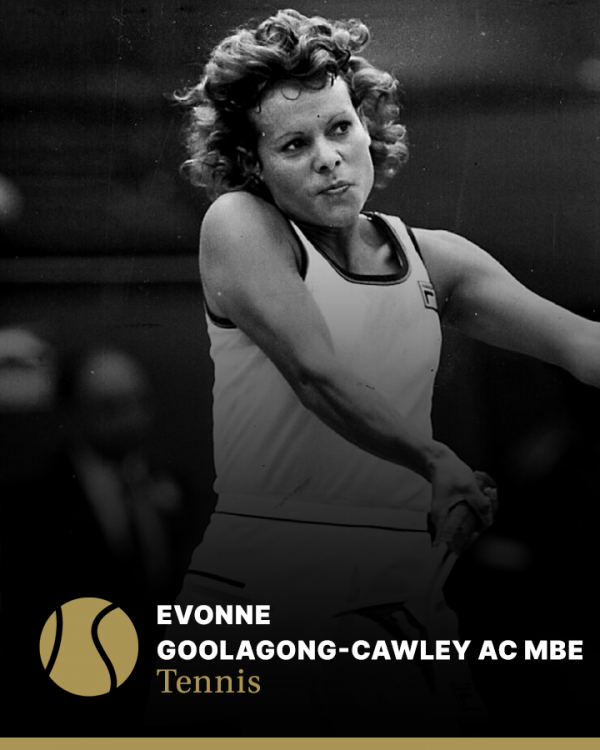 Evonne Goolagong-Cawley AC MBE was inducted into the Sport Australia Hall of Fame in 1985 as an Athlete Member for her contribution to the sport of tennis and was elevated as a Legend of Australian Sport in 1994.

Goolagong-Cawley grew up in Barellan, country New South Wales, where she showed an early aptitude for tennis, joining the local tennis club at the age of seven. It’s unlikely that she would have left Barellan if a kindly resident, Bill Kurtzman, hadn’t seen her peering through the fence at the local courts and encouraged her to play.

Goolagong-Cawley was a natural, free-flowing right-hander blessed with speed, lightning reflexes and a carefree temperament. Tipped off to this by two of his assistants, Vic Edwards, proprietor of a tennis school in Sydney, journeyed upcountry to take a look. He immediately spotted the talent that would eventually result in two Wimbledon, one French, and four Australian championships.

On the suggestion of Edwards, Goolagong-Cawley moved to Sydney permanently in 1965, at the age of 14, to concentrate on her tennis career and lived with the Edwards family. Edwards coached her and later became her personal manager. She entered the NSW championship at the age of 15 and in January 1968 played in the Australian women’s singles championship. At this point she was ranked as the top junior in NSW.

In 1970 Goolagong-Cawley travelled to London to compete at Wimbledon for the first time and was a member of the Australian Federation Cup team that same year. Her rise was swift. On her second world tour, in 1971, just before turning 20, Cawley beat countrywoman Helen Gourlay to win the French. She was runner-up in 1972 and made the semi-final in 1973.

A month after winning the French in 1971, seeded third at Wimbledon, she stunned defending champion and her girlhood idol, Margaret Court, in the final, 6-4 6-1.

Called ‘Sunshine Supergirl’ in London, Goolagong-Cawley captivated crowds wherever she played with her graceful movement and gracious manner. Three more times she made the final, losing to Billie Jean King in 1972 and 1975 and Chris Evert in 1976, and it appeared that her Wimbledon title days were over. However, a unique success was to be hers, victory again at the end of a nine year gap, in 1980, her last tournament triumph. Seeded fourth, Cawley made a spirited run through 1977 runner-up Betty Stove, ninth seed Hana Mandlikova, sixth seed Wendy Turnbull, second seed Tracy Austin, 6-3 0-6 6-4, and finally third seed Evert, 6-1 7-6 (7-1), the only Wimbledon singles championship to end in a tie-breaker and became the first mother to win since Dorothea Douglass-Chambers 66 years before. Goolagong-Cawley’s record at Wimbledon was 49-9 in singles, 21-7 in doubles, 19-8 in mixed.

Although she won the United States Indoor in 1973 over Virginia Wade, 6-4 6-4, she couldn’t quite make it at the Open, the only woman to lose the final four successive years, 1973 through to 1976, at Forest Hills, falling to Court, King, then twice to Evert.

Her record in doubles is also impressive, winning five Australian and one Wimbledon doubles titles.

After nursing injuries for a period, she retired from competition in 1983 and in 1988 she was inducted into the International Tennis Hall of Fame at Newport, Rhode Island, USA.

After living in the United States, she returned to Australia to live in 1991 and was a Member of the Board of the Australian Sports Commission from 1995 to 1997. Since 1997, she has held the position of Sports Ambassador to Aboriginal and Torres Strait Island Communities.

1971: Named Australian of the Year
1972: Named a Member of the British Empire (MBE)
1982: Made an Officer of the Order of Australia (AO)
1985: Inducted into the Sport Australia Hall of Fame
2018: Made a Companion in the Order of Australia (AC)
2018: Received the Philippe Chatrier Award from the ITF for outstanding on-court career and dedicated public service in retirement
2021: Named inaugural winner of the Sport Australia Hall of Fame Dawn Award