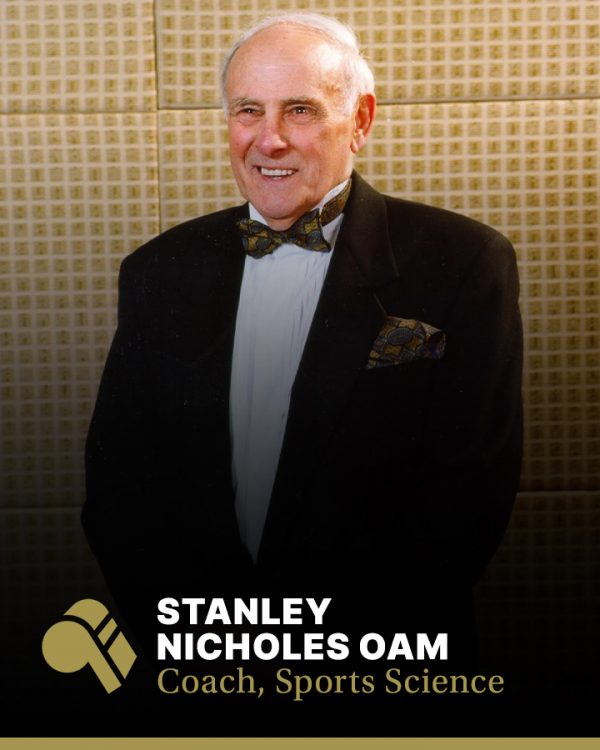 At the age of 32, Stan Nicholes put behind him his own personal endeavours in weightlifting to start concentrating on conditioning and improving athletes in various areas.

Nicholes has had a legendary impact on Australian sport in the areas of both coaching and sports science. Within the sport of tennis, and particularly Davis Cup, he is regarded as having been an integral part of the Australian teams’ ongoing success having assisted Harry Hopman for about 20 years and Neale Fraser for about 15. Many champions came under his guidance during this time including Frank Sedgman, Margaret Court, Ken Rosewall, Rod Laver, John Newcombe and Ashley Cooper.

Nicholes’ expertise in elite fitness inevitably filtered into a range of sports including Australian football, where he trained the Richmond Football Club players to two premierships. In the sport of rowing alone he can be credited with conditioning 17 athletes who have won Australian titles, including four gold medal winners, and the quads silver medal at the 1984 Los Angeles Games.

Within the Olympic arena Nicholes also guided a range of champions. The greatest of these was Herb Elliott, who utilised his training up until his famous win at the 1960 Rome Olympics. The 1956 Australian Olympic water polo team also came under Nicholes’ guidance as did Vern Barberis who won bronze for weightlifting at the 1952 Helsinki Games, and Peter Foster who won bronze in the kayak at the 1988 Seoul Olympics.

In 1986 Nicholes was awarded the Medal of the Order of Australia (OAM) for his service to sport as a fitness consultant.