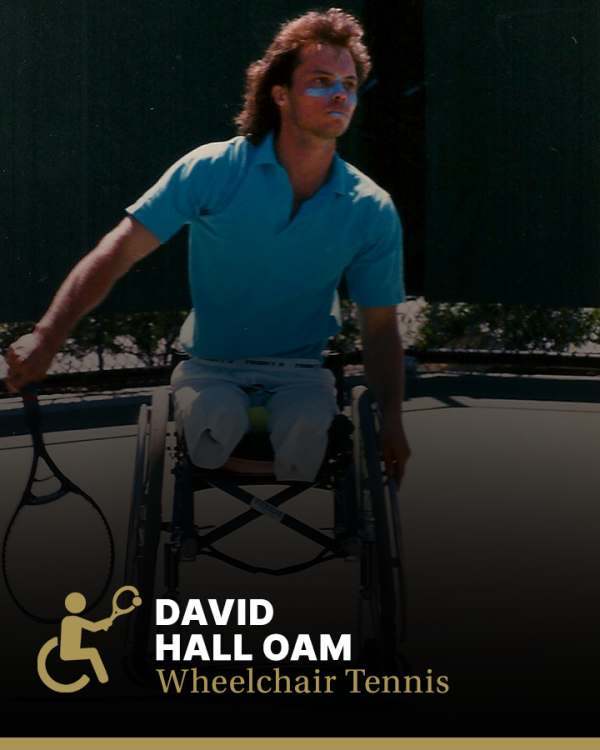 David Hall OAM was inducted into the Sport Australia hall of Fame in 2010 as an Athlete Member for his contribution to the sport of wheelchair tennis.

Few people have been more dominant in any sport than Hall. Between 1995 and 2005 he won the Australian Open Wheelchair tennis title nine times, the British Open seven times, the US Open eight times and the Japan Open eight times.

David took up wheelchair tennis at the age of 19 after losing his legs in a car accident. Three years later he represented Australia at the 1992 Barcelona Paralympics and in 1994 he took out his first international major, the Japan Open. The following year he took over the world’s No 1 ranking with victory in the 1995 US Open.

Between 1994 and his retirement in 2005 he recorded 19 Super Series victories (equivalent to the Grand Slam in able bodied tennis) a feat that is even more impressive when you consider that the Australian Open (which he won nine times) did not become a Super Series event until 2003.

One of the most satisfying of his many victories came in the 2000 Paralympics in Sydney where he became the first Australian to win singles tennis gold and also took silver in the doubles.
David won over 80 events spanning a 15-year career including 9 Australian Opens and the Singles Gold Medal at the 2000 Sydney Paralympics. These achievements secured David’s Induction into the International Tennis Hall of Fame (ITHOF) in 2015.

The personalized official ITHOF rings were introduced in 2011 and are being presented to Hall of Famers at tennis events around the world over the next few years as a special symbol of their International Tennis Hall of Fame induction. David was honoured at the Australian Open with his ITHOF ring presentation on Monday 22nd January 2018.