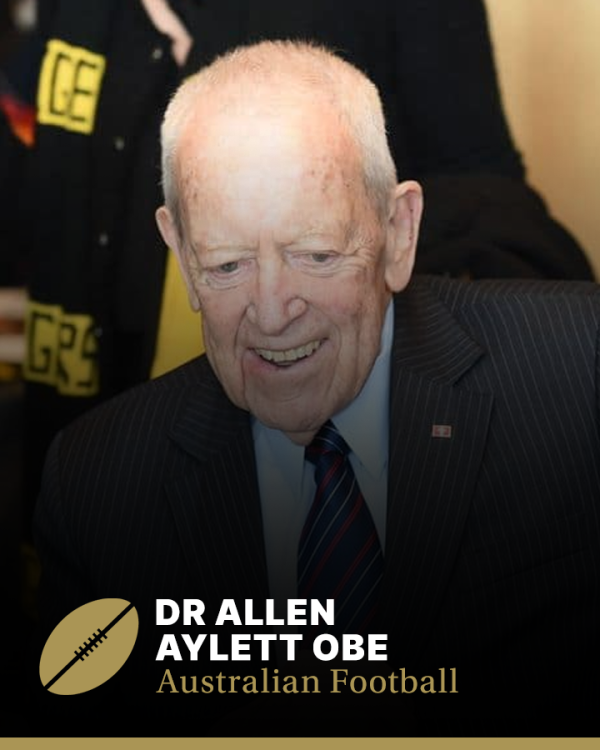 Dr Allen Aylett OBE was inducted into the Sport Australia Hall of Fame in 2006 as a General Member for his contribution to sports administration in Australia football.

Aylett’s involvement with Australian football at the elite level spanned more than 50 years, throughout which time much has changed thanks largely to his vision for the future of the game.

Elevated from the colts to the senior side of the VFL’s North Melbourne while still a schoolboy at 17, an uncommon achievement in the 1950s, saw the start of what was to become a much heralded and successful playing career.

Aylett’s skill was evident and earned him the protection of his teammates, the Shinboners, arguably the toughest group of players collected at one time. His deceptive pace, great ball control, and greater than average strength quickly established him as a champion and, most say, one of the game’s greatest rovers.

Aylett kicked 313 goals in 200 games for the Roos and was awarded the Syd Barker medal in 1958, 1959, and 1960, captained the club between 1961 and 1964, and represented Victoria 18 times. Aylett was also the first Victorian to win the coveted Tassie Medal as the best player in the triennial state championships.

After a second serious arm injury, Aylett retired from the field. However he maintained his involvement in football as a writer with the Sporting Globe and panellist on HSV7’s famous Football Inquest with the likes of Ron Casey and Mike Williamson.

Then, only a year after finishing his playing career, Aylett continued his quest of bringing the VFL premiership cup to Arden Street for the first time and joined the board of the North Melbourne Football Club and was elected president in 1971, the youngest to hold such a position in football history.

Aylett gathered about him a team that was, over the next five years, to re-define football administration and drive, not only for North Melbourne, but the entire league, to a level of professionalism and business focus never seen before. Under Aylett, North were pioneers, introducing initiatives such as paid sponsorships, corporate entertainment and other marketing bonanzas such as the Grand Final Breakfast that continues to run 30 years later, setting the standard for all other clubs to follow.

This and smart recruiting and football management, saw ‘poor old North’ in 1975 win their first ever premiership after 46 fruitless years in the competition and become a powerhouse of the VFL – dominating on and off the field throughout the 1970s.

In 1977 Aylett, aged 42, was then elected by his peers at rival clubs to head the Victorian Football League. In his eight years as VFL president, Aylett lead a team that transformed the game and laid the foundations for what we now know as the Australian Football League.

These eight years saw many changes and lots of action, including hosting royalty and government dignitaries, icons and celebrities from around the world, heated battles with the government at the time and tussles with the Melbourne Cricket Club, the competition became truly national when South Melbourne moved to Sydney to become the Sydney Swans, Friday night football was introduced as well as Sunday games and live grand final telecasts, and the foundation of a sport’s marketing empire and self governed league, the AFL.

1979: Made a Member of the Order of the British Empire (OBE) for his services to Australian football
2000: Awarded the Australian Sports Medal
2001: Awarded the Centenary Medal
2006: Inducted into the Sport Australia Hall of Fame