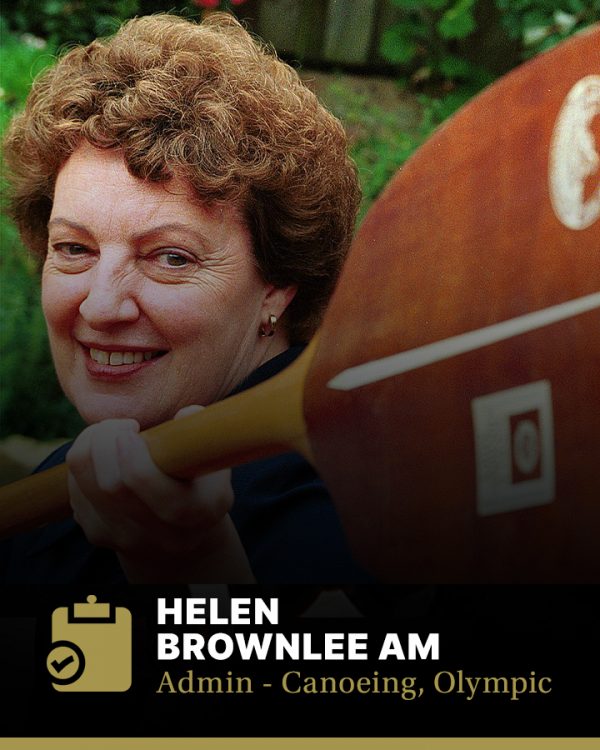 Helen Brownlee OAM was inducted into the Sport Australia Hall of Fame in 2015 as a General Member for her contribution to administration within the sport of canoeing and the Olympic movement.

The Sydney schoolteacher has devoted more than 50 years to canoeing as a competitor, judge and administrator and is the first woman to be awarded Life Membership of the Australian Olympic Committee. She is also the first woman elected to the AOC executive board and in 2013 became the vice president. She has also served as the president of the NSW Olympic Council.

Shortly before being inducted into The Sport Australia Hall of Fame in 2015 she was awarded the Olympic Order for her significant contribution to world sport and her dedication to upholding the Olympic ideals. It was presented to her by the president of the International Olympic Committee, Thomas Bach, during the Oceania National Olympic Committee’s general assembly in Fiji.

Brownlee started in competitive canoeing as a teenager under the guidance of her father Os Brownlee, who was one of the founding members of Australian canoeing. Her paddling took her from river touring to sprint competition and to slalom and wildwater disciplines. She won medals at state, national and international levels, including Australia’s first international slalom medal.

She has been honoured by the International Olympic Committee for her work in education and invited to become a member of the IOC Commission for Culture and Olympic Education and remains a strong advocate for the involvement of more women in sport.

Given the opportunity to develop programs and initiatives for the 2000 Sydney Olympics, she earned the International Fair Play Trophy on behalf of the teachers and students of NSW for their “unreserved support” of the Olympic and Paralympic Games in the spirit of solidarity, tolerance and fair play.