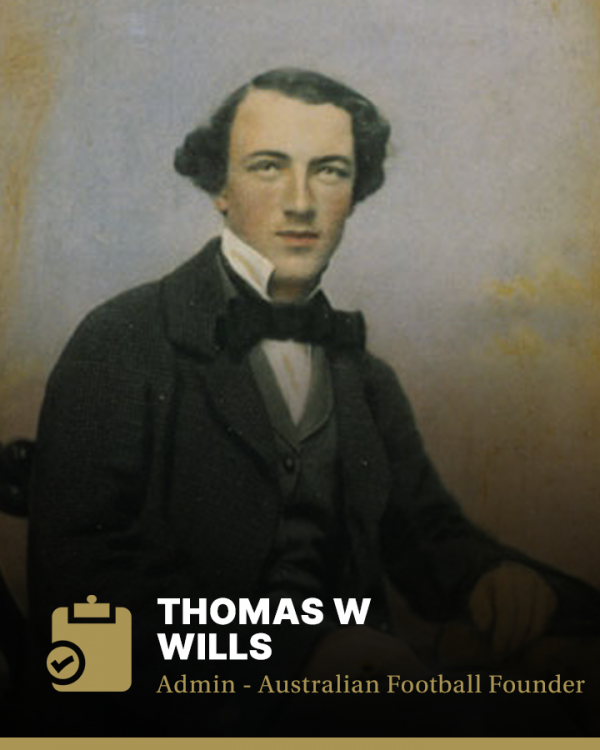 Regarded as the father of Australian football, Thomas Wentworth Wills was originally from Sydney but moved with his family to Lexington Station at Moyston in the Ararat district (Victoria) in 1839. Aboriginal tribes in that area played a game known as ‘Marn Grook’, using a ball made of animal skin stuffed with feathers or charcoal. The participants kicked the ball high into the air and tried to catch it in competition with the other players. In one dialect, the word ‘mark’ means catch. It is likely that Wills used elements of ‘Marn Grook’ when formulating Australian football some years later.

He was educated in Melbourne until 1852 when he went to Rugby School, England, where he played football and captained the cricket XI. In those times the students played a primitive form of football with no formal rules. It wasn’t until after the development of Australian football that other codes such as rugby and soccer were formalised. Intended for Magdalene College, Cambridge, in 1856, he did not matriculate but he was included, by Oxford’s permission, in the Cambridge XI in the inter-university match of that year. From 1853 to 1856 he was a notable amateur cricketer in England, playing mainly for the gentlemen of Kent, but also for the Marylebone Club and on one occasion for United Ireland.

Wills returned to Melbourne late in 1856 and played 12 games for Victoria against New South Wales between 1857 and 1876, scoring 319 runs at an average of 21.27 and taking 72 wickets at 10.23. He played for several teams, but mainly for Richmond and for the Melbourne Cricket Club, of which he was secretary in 1857/58. Although articled to a Collingwood solicitor in 1859 he never practised. In 1861 he accompanied his father and others overland to take up a property at Cullinlaringo, Queensland. In October, all but Wills and two others who were absent from the camp were killed by Aboriginals. After helping his brother to run the property he returned to Melbourne in 1864.

Wills then became a cricket coach and trained the Lake Wallace region Aboriginal side that toured England in 1868. As a batsman he could be crudely effective, but he was noted more as a bowler. Wills introduced round-arm and over-arm bowling into Victoria and was constantly accused of throwing, especially his faster deliveries. But fast or slow, thrower or bowler, he returned some devastating analyses at all levels of cricket.

A frequent and cantankerous letter-writer to the sporting press, Wills’ most famous letter was in ‘Bell’s Life in Victoria’, July 10, 1858, calling for cricketers to take up a winter sport for fitness’ sake. The response to this letter enabled him, his brother-in-law H. C. A. Harrison, and others to meet and draw up rules for a football game later known as Victorian or Australian rules. Wills played over 210 games, mainly for Geelong, until he retired in 1876. Regarded as a brilliant ruck player, he was able to execute excellent drop kicks and place kicks as far as 60m. His stamina and speed were exceptional, his organisational skills were well recognised, and he pioneered the concept of position play.

Wills co-umpired the first documented match between Scotch College and Melbourne Grammar, which commenced on Saturday August 7, 1858, and continued for two more afternoons, and was one of several cricketers responsible for forming the Melbourne Football Club. He was probably the Chairman of the Committee that met to formulate the first set of rules.

Wills was responsible for fostering the game in the districts of Geelong, Ballarat, and Bendigo and it is believed that the Geelong Football Club was formed on his recommendation. In 1876 he was the donor of the Challenge Cup for the best team in Geelong, Ballarat, and districts. In 1880 he and Harrison, attempted to organise an exhibition match in England involving Melbourne and Geelong. To their disappointment the venture failed to materialise. Wills urged sporting authorities in NSW, Tasmania, and New Zealand to adopt Australian football.