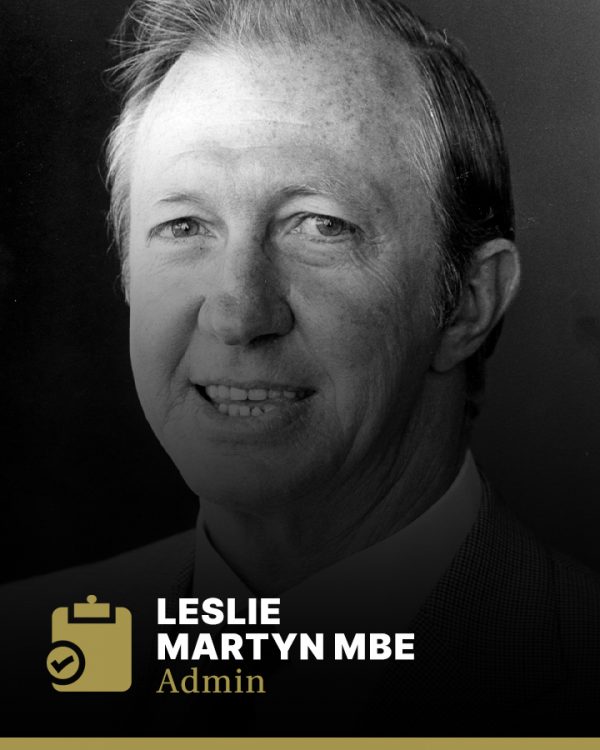 Leslie Martyn MBE was inducted into the Sport Australia Hall of Fame in 1989 as a General Member for his contribution to sports administration.

In 1976, following the poor performance of the Australian team at the 1976 Montreal Olympic Games, Martyn was a key figure in the formation of the Confederation of Australian Sport (CAS). He, along with Wayne Reid and Sir Arthur George, met with then Prime Minister Malcolm Fraser to seek more funding for sport from the Government. CAS was formed with Reid as inaugural President, George as Vice President, Martyn as Chairman of the Development Committee and member on the Government Liaison Committee, and Garry Daly as secretary general. CAS represented all national sports as an undoubtedly strong lobbyist group and was influential in the establishment of the Australian Institute of Sport (AIS) in Canberra.

Martyn eventually replaced George as Vice President and in 1983 was appointed President after Reid resigned. He served the position until 1987 and backed the establishment of the Sport Australia Hall of Fame in 1985. He was responsible for linking all state sports bodies and Governments to form a Coaches Association and is credited with establishing the Coaches Accreditation Program. Throughout this time, he remained actively involved in strength coaching.

In 2000, he took great personal pride in being part of the Sydney 2000 Olympic Games Torch Relay.

Martyn’s influence wasn’t confined to Australian sport, and he held highly regarded positions on the Boards of various international sporting organisations, including Governor of the World Masters Games Association and Member of the International Board of Governors of Sport.

In retirement, his passion for fitness remained and, as he aged, Martyn took up cycling and enjoyed the sport in his later years. At 70-years-old he completed his first Around the Bay ride in Melbourne.