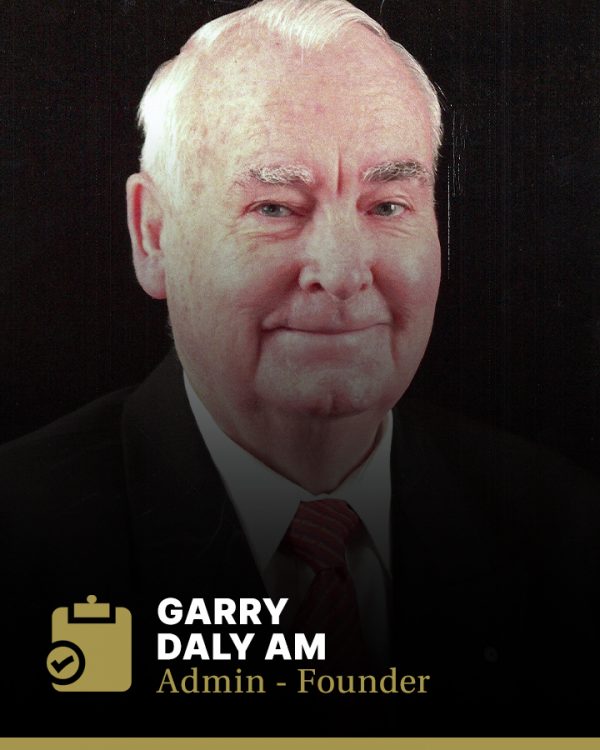 Daly came up with the idea of a national Hall of Fame in 1975 whilst full time Executive Director of the Lawn Tennis Association of Australia. Following a decision by the Federal Government to remove government funding from Australian sport, at a meeting of representatives of national sporting bodies held to consider what action could be taken to overturn this decision, he moved a motion to form the Confederation of Australian Sport and became its founding Honorary Secretary.

In 1976 he became Secretary of the International Asian Tennis Circuit.

In October 1978 he became the full time Executive Director of the Confederation of Australian Sport where he proposed and oversaw the establishment of the annual sport award system, the Sport Australia Awards.

Among other accomplishments, he:
-Was the Secretary of the Organising Committee for the inaugural General Assembly of the International Assembly of Confederations of Sport in March 1981 which was chaired by HRH the Duke of Edinburgh,
-Became Secretary General of the Asia Pacific and Oceania Sports Assembly, a position he still holds,
-Was Secretary of the Australian Games Foundation from 1981 to 1986
-Saw the Confederation of Australian Sport grow to 125 national sports associations
-In 1985 was honoured as a fellow (Life Member) of the Confederation
-Proposed the concept of Masters Games to the Northern Territory government which established the Central Australian Masters Games in 1986. He proposed the Australian Masters Games to Tasmania and the first of these was conducted in 1987
-Became Secretary General of the International Assembly of National Organisations of Sport in 1983, a position he still holds
-Was Secretary of the Confederation of Australian Sport Coaches Assembly for eight years and a founding member of the Australian Coaching Council from 1980 to 1986.
-Coordinated a national program of seminars and the publication in 1980 of ‘The Master Plan for Sport’ which greatly influenced the establishment of the Australian Institute of Sport.

On leaving the Confederation in 1989 he continued to organise the Sport Australia Awards until 1993. On the basis of knowledge gained on a private tour of Hall of Fame’s and sports museums in North America in 1986 he conceived and established the Legends of Australian Sports program. The first athlete so recognised was Betty Cuthbert in December 1993 and he then oversaw the naming and honouring of the first fifteen Legends.

He served as Secretary of the Australia Sports Media Association from 1989 to 2000 and on the International Olympic Committee Sport for All Coordination Group from 1995 to 2002. In 2004, he was elected Chairman of the Asia Pacific and Oceania Masters Games Board of Management.

In 1989 he was made a Member of the Order of Australia (AM) for his services to sport and to the community.
Inspiration: “You can only achieve through imagination and effort”