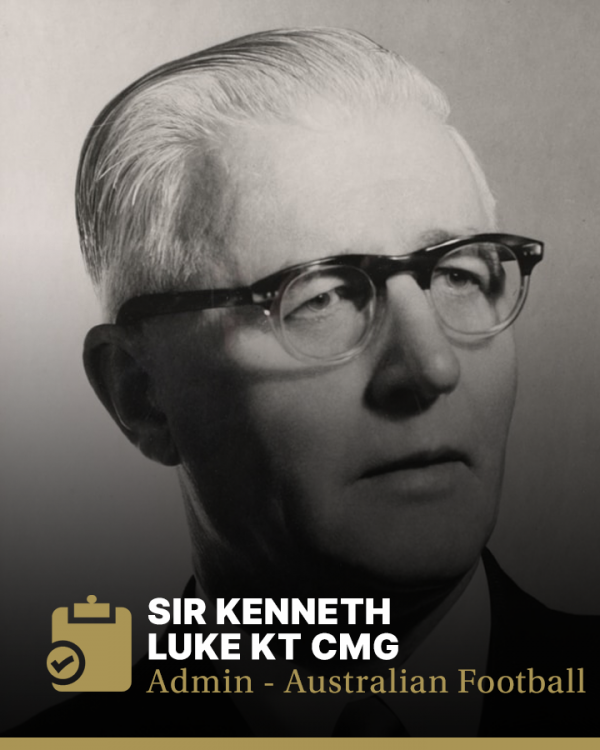 Sir Kenneth Luke guided the destinies of the VFL with outstanding ability to becoming a commercial enterprise in his energetic term as president from 1956 to 1971. He displayed qualities of leadership and foresight that enabled the League to achieve great growth and development and was also the driving force behind the VFL building it’s own stadium, VFL Park.

A cricketer, motorcyclist and yachtsman in his youth, Luke also enjoyed racing and owned the successful ‘FF’ horses, with names like Fighting Force and Feeling Fine. In his view, sport bred character. He was best known, however, for his involvement with Australian Rules football. From 1938 to 1955 he was president of the Carlton Football Club. A delegate from 1935 to the Victorian Football League, he was its vice-president from 1946 to 1955 and president from 1956 to 1971. With post-war growth generating record crowds, he consolidated central administration and professionalised the game for players.

In 1962 the VFL bought land at Waverley for a new ground, which Luke envisaged as an alternative to the Melbourne Cricket Ground for football finals. VFL Park, his legacy, opened in 1970. The establishment of VFL Park, despite the many trials and tribulations faced in the days preceding the ‘turning of the first sod’ and the commencement of building activities, is indicative of his willingness to meet all challenges. The grand stand at VFL Park bears his name. Throughout his association with the League and the Carlton Club, Sir Kenneth earned the warm respect and esteem of officials and players alike.

‘KG’, as he was known, was a self-made man, hard-working and disciplined, but also far-sighted, courteous and even-tempered. The range of his interests and the number of his involvements was remarkable – he believed that a busy man could always take on another job. His involvement in Victorian sport also extended to the Olympics Construction Committee, and the Olympic Park Board of Trustees.

He was made a Companion of the Order of St Michael and St George (CMG) in 1954 for his service to commerce and philanthropy and in 1962 was made a Knight Batchelor for his public service in Victoria.