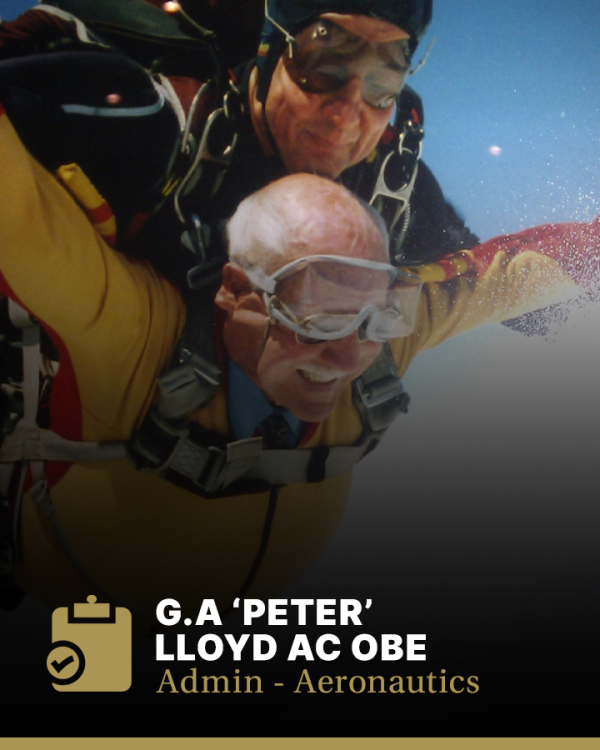 George Alfred ‘Peter’ Lloyd AC OBE MID was inducted into the Sport Australia Hall of Fame in 1992 as a General Member for his contribution to aeronautics.

For many Australians, Lloyd, affectionately known throughout Australia as Peter, is considered the ‘Father’ of sport aviation in Australia and around the world.

In 1951, Lloyd was elected honorary treasurer of the Royal Aero Club of New South Wales, one of the oldest aero clubs in Australia, and in 1957 became its president, a position he held until 1967. He was again the president from 1972 to 1974. He built the club up from a depressed condition, flying only two aircraft, to the largest training school in the Commonwealth.

Lloyd was a soldier in World War II and later qualified as a pilot in 1955. He was mentioned in dispatches for bravery in World War II during AIF service in the Middle East and Papua New Guinea. He had nearly 11,000 hours of flying experience on general aviation and aerobatic aircraft, as well as additional experience in gliding, parachuting and ballooning.

In 1958 he became the president of the Federation of Australian Aero Clubs, and because of its excellence under his guidance, gained Royal recognition and became the Royal Federation of Aero Clubs of Australia (RFACA). Lloyd built the Federation from eight clubs to 82 during his presidency, embracing many thousands of members and hundreds of aircraft. Under the RFACA, he encouraged the other aviation sports (gliding, ballooning, parachuting, hang-gliding, aerobatics, model aircraft, etc.) to compete nationally and internationally.

During his time with the Federation, the Women Pilots Association accepted his invitation to become members of the RFACA. The RFACA organised inter-club air sports events and developed the national system of competitions. In time, hang gliding and ballooning were brought into the RFACA and the Federation Aeronautique Internationale (FAI) world of air sports.

He became a member, freeman, and later liveryman of the London based Guild of Air Pilots and Navigators and was chairman of its Australian regional branch in 1975 and 1976, the first non-professional airman to be elected.

During the years he served in the FAI, first as treasurer-general for nine years from 1976 to 1984, then as the first vice president from 1982 to 1986, and finally as president from 1986 to 1988, he actively supported the development of sport aviation on a worldwide basis.The financial future of FAI was secured and the steady surplus achieved built up into a solid reserve.

As FAI president, he was called on to help in many matters of national and international consequence. Turkey, Greece, Cyprus, among others used him to settle problems. He worked personally with Gorbachev of the USSR and Ronald Reagan of the USA and other world leaders to free a teenage German flyer, held after illegally flying to Moscow. He also liaised with the president of the IOC resulting in the recognition of three of the aviation sports (gliding, hang gliding and parachuting) as Olympic sports. He was also instrumental in the plan to develop the World Air Games held in Greece in 1995.

In a period of six months in 1969, at the request of the Australian Prime Minister, he planned, organised, raised the funds for, and was the chairman and chief executive officer of the BP Captain Cook Bicentenary Air Race from London to Sydney. With the assistance of the Royal Aero Club of the United Kingdom and FAI Members en route, the air race was a huge success. Of the 72 aircraft that left Gatwick Airport, 58 crossed the finish line at Sydney’s Bankstown Aerodrome within 15 minutes of each other. The entrants ranged from small, single engine types through to twins and even an executive jet.

He was founding Chairman of Directors of Helicopters Utilities Limited, which operated up to 118 helicopters in Australia and other countries, including Korea, Indonesia, and Papua New Guinea. His work did much to have helicopters recognised as a rural tool in Australia as well as a military and industrial one. For 14 years he served as an honorary director of Australia’s famous and unique Royal Flying Doctor Service, which brings medical aid to people who live in the vast and largely inaccessible outback of Australia.

In 1989 he was presented with the FAI Gold Air Medal, the world’s highest and most prestigious civil aviation award. Only two other Australian’s have received this honour, Bert Hinkler and Sir Donald Anderson. He holds an Oswald Watt Gold Medal (Australia’s highest aviation award) for outstanding services to Australian aviation. The late Sir Charles Kingsford Smith won this medal three times.

Lloyd has also been honoured by the USSR with the Yuri Gargarin Award for services to the air sports internationally, aeronautics, cosmonautics, and the cause of world peace. In addition, he was recognised by Czechoslovakia with the Order of Svazam (first class) for service to world goodwill by means of mechanical sports, without prejudice of class, colour, or creed.

Lloyd devoted an extraordinary amount of time and energy to Safeskies, Australia’s international Air Safety Conference, in his role as Executive Chairman. Safeskies is attended by delegates from over 20 countries. In 2006, Lloyd was awarded the ASFA Patron’s Aviation Safety Lifetime Achievement Award for outstanding lifetime commitment and contribution to enhancing aviation safety in Australasia. Lloyd was the recipient of the Oswald Watt Gold Medal in 2017 an award for ‘A most brilliant performance in the air or the most notable contribution to aviation by an Australian or in Australia’ presented by the Royal Federation of Aero Clubs of Australia.