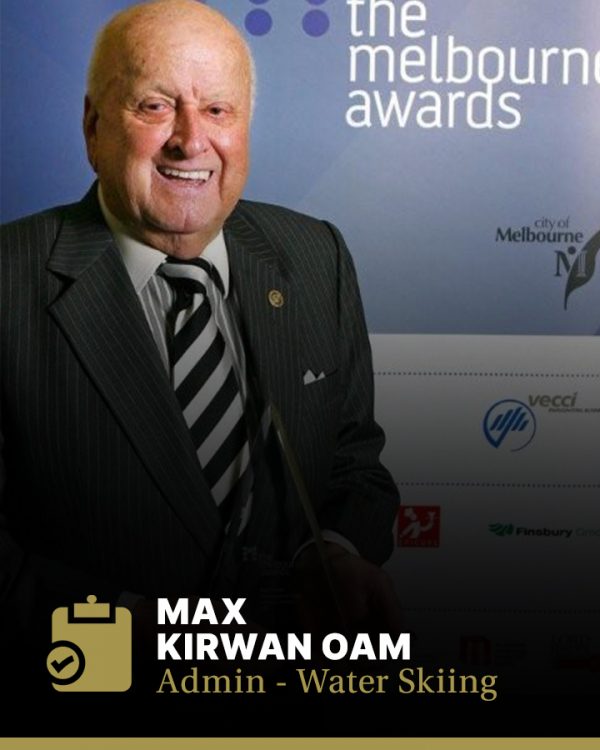 Max Kirwan OAM was inducted into the Sport Australia Hall of Fame in 1989 as a General Member for his contribution to administration in the sport of water skiing.

Kirwan was responsible for developing water skiing through 40 years of involvement and was President of the Australian Water Ski Association for eight years between 1970-1978. As a sport, water skiing made giant strides during this time, especially in the barefoot and ski racing disciplines.

Kirwan’s administration skills were second to none in his sport. He convinced the world water ski body that Australia had the ability to host the coveted world titles and, although ski racing was barely recognised as a sport at the time, and in 1978, he was appointed Group 111 President – the Asia Australasian Region. Kirwan lobbied Australian officials to assist and teach Asian countries to conduct world class tournaments and arranged for Australia’s top skiers to coach throughout the Pacific region. These efforts were finally rewarded when Indonesia hosted the first ever Group 111 titles outside Australia and New Zealand.

In 1985 Kirwan became the first person to be recognised on the Queens’ Honours List for services to water skiing in Australia when he received a Medal of the Order of Australia (OAM).

In 2010 Kirwan was presented with the Melbourne Award for his contribution to the City of Melbourne and for promoting the Moomba Masters International Water Ski Championships for over 50 years – he served as either Chairman or Moomba Masters Coordinator throughout this period. He first approached the then Melbourne City Development Organisation in 1958 with a proposal to run exciting events on the Yarra River over a one-week period. In 1960 his dream became a reality when he launched the first Moomba Masters Water Ski Championships on Melbourne’s Yarra River – an event that has become one of the most famous international water ski events in the world.