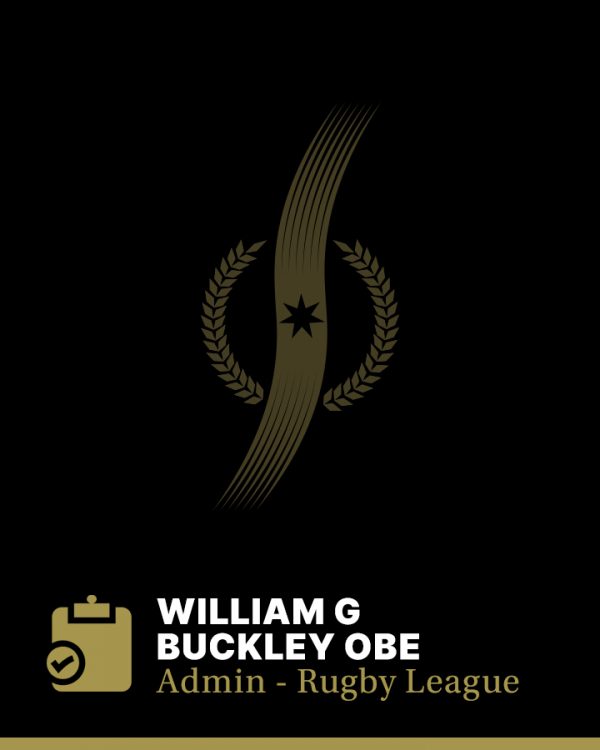 Bill Buckley was a man who made rugby league his life, and was active even during his last years. He could never hide his deep love for the blue jumper of Newtown. Born in Petersham he played 75 first-grade matches for Newtown. He broke his leg in 1928 but returned to play another three seasons. He played front-row and hooker and was a hardy, forceful type.

Buckley knew success had to be earned the hard way and he worked his way up from the bottom rung of the administration ladder. He served his apprenticeship for the leagues top post under Harry ‘Jersey’ Flegg, whom he greatly admired. When Flegg died in 1960, Buckley was the obvious replacement. His tough, direct speech complimented his domineering presence and during his reign, rugby league blossomed as never before.

He joined the New South Wales Rugby League General Committee as a delegate of Newtown, before becoming President, and was made a Life Member of Newtown and the Australian Rugby League. As well as being boss of the ARL from 1960 until his death in 1973, Buckley was President of the NSW Leagues Club and a member of the SCG Trust.

He brought ‘drive’ into the leagues operations, and always with determination to strengthen the game internationally. Under his leadership the NSW league had some of its most fruitful years. He guided the game through the 60s, possibly the greatest era rugby league had experienced.

He lived with a vision of the league owning its own ground. In 1964 he announced plans for a $16.2 million football stadium at St Peters as part of a sporting complex but the plan never eventuated.

One innovation which Buckley helped implement in 1960 was the transfer system and the outlawing of the residential qualification rule for graded players in Sydney. Such a change, though not welcomed by some administrators was seen as a more workable way of dealing with player movements. For too long, players wishing to play for the club of their choice would fake their residential address so as to qualify to play with a particular club. For those like Buckley, the answer was a transfer system, one that was not always going to work smoothly, but similar to the systems that worked in soccer and rugby league in England.

Buckley’s services to rugby league throughout the world were recognised before he succeeded Flegg. In 1960, the French Rugby League awarded him its medal, an honour bestowed on few officials outside of France. Antoine Blain, the secretary of the French Rugby League said, “Mr Buckley is one of the world’s outstanding rugby league administrators and his vices to the game are recognised in every country.”

One of Buckley’s other major achievements was to break down English opposition to Australia’s insistence on a ‘new deal’ on the division of tour profits. It culminated in a man to man phone call between Buckley and the English League Chairman of the day, Tom Mitchell, and a new agreement much to Australia’s advantage. Great Britains take was reduced by 10% for Tests and 5% for other games.

In 1968 Buckley became an Officer of the British Empire (OBE) for services to sport, especially rugby league and the community.