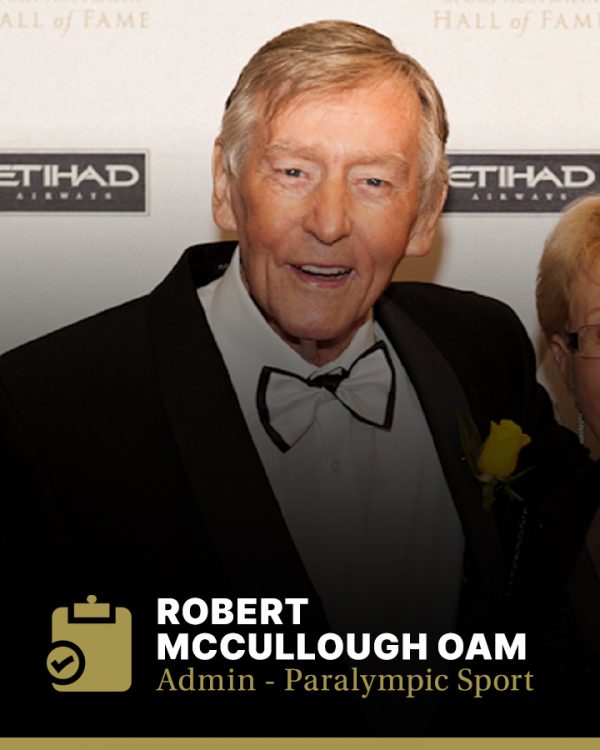 When Bob McCullough took over the presidency of the Australian Paralympic Federation in 1993, the organisation was on the verge of bankruptcy and without any plan for the future. The organisation had no government funding or any approach to marketing or fund raising. In the succeeding years through to October 1996, McCullough turned the Australian Paralympic Federation around into what is now recognised as a professional organisation being credited with significant achievements in management and services to Australia’s elite disabled athletes. He was awarded the Sports Administrator of the Year Award in 1996 by the Confederation of Australian Sport.

The Paralympic Preparation Program funded by the Australian Sports Commission and the members of the Australian Paralympic Federation was established by McCullough in 1994 which brought about a coordinated approach for the first time to the preparation of elite athletes for a Paralympic Games. The program was intense with commitment from the athletes and coaches to producing the best team ever to represent Australia. The introduction of high qualifying standards was also a significant feature of the program.

In parallel with the athlete preparation program, McCullough put in place the marketing and fundraising strategy to raise $1.5m for the team to compete at the 1996 Atlanta Paralympic Games. This was achieved through the use of professional marketing consultants and the establishment of the APF fundraising councils throughout Australia, together with the lobbying of state governments to support the 1996 Australian Paralympic team. The financial target was achieved and the team was fully funded for both pre Atlanta competition and the Paralympic Games.

The professional approach in the preparation of the team and the organisation and structure introduced by McCullough is recognised by governments and the sporting community throughout Australia as being instrumental in the Australian team making sporting history at the 1996 Paralympic Games at Atlanta. To finish second to the USA is a feat being admired by the Paralympic movement throughout the world and Australia is now recognised as a leader in Paralympic sports.

McCullough has also played a major role in achieving financial viability of the APF to provide for the preparation of the Nagano and Sydney 2000 Paralympic Games. He also negotiated an agreement with the Sydney Paralympic Organising Committee on Marketing through to 2000 with the APF receiving $5.5m over the four years leading to Sydney 2000.

At the 2002 Winter Paralympics in Salt Lake City, McCullough was awarded the Paralympic Order in Silver ‘in recognition of the outstanding merit in the cause of world sport for persons with a disability and their faithfulness to the Paralympic ideal’. His work at national and international level included chairman of Wheelchair Sports Australia from 1990 to 1999, president of the International Stoke Mandeville Wheelchair Sports Federation from 1996 to 2001, member of the International Paralympic Committee Executive from 1996 to 2002, and in 2001 represented the Paralympics on the IOC Evaluation Commission for the 2008 bidding cities.

In 1996 McCullough was awarded the Medal of the Order of Australia (OAM) for his service to sport through the Australian Paralympic Federation, North Queensland Games Foundation and little athletics.