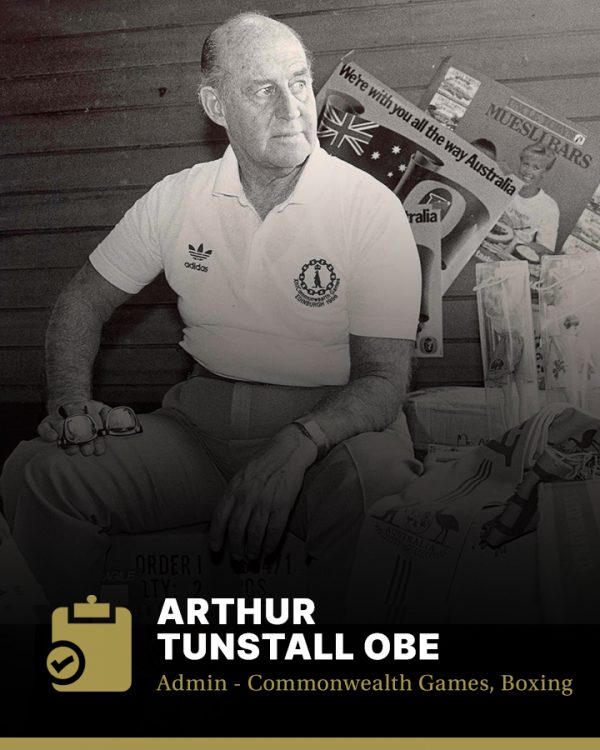 For over 50 years Arthur Tunstall has committed his life to sport in the administration field. He became immersed in voluntary sports administration initially with the New South Wales Amateur Boxing Association (NSWABA) and the Australian Commonwealth Games Association (ACGA) – NSW state division. From 1953 he served for 46 years as Honorary Secretary/Treasurer of the Amateur Boxing Union of Australia (ABUA) and from 1969 to 1998 he was Secretary/Treasurer of the ACGA.

Tunstall was one of the pioneer voluntary Australian sports administrators who played a crucial role in the establishment of the national sport organisation system, which now controls and manages Australian sport. With the able and committed support of his wife Peggy, he was the key person in amateur boxing and the Australian Commonwealth Games movement for most of the second part of the twentieth century.

Tunstall has been the most influential person in amateur boxing in Australia over the past 50 years. His control of the administration of the sport has been unique in Australia. He is seen as the expert authority not only on administrative matters but also on the technical side of the sport. This is a result of his extensive knowledge and experience gained over many years with trainers, coaches, judges, sports medicine persons and promoters.

Tunstall has been a Member of the NSWABA for 59 years and the Honorary Secretary for 46 years. During these years he has attended hundreds of boxing tournaments acting as referee, judge, coach, and arena manager. As the Honorary Secretary/Treasurer of the ABUA he was in charge of the boxing program from the weigh in to the presentation of medals. All team movements were handled through his office, with about six overseas competitions per year to organise.

Tunstall was elected to the position of Vice President of the Oceania bureau by the International Amateur Boxing Association (IABA) in 1989, and was appointed as the Chairman of the Technical and Rules Commission.

During all this time he became a fully qualified Australian and Oceania referee and judge, and an international judge. He has conducted numerous Olympic Solidarity courses and examinations for referees and judges at both Oceania and international levels.

In the position of Team Manager he has taken teams to international competitions since the Rome Olympics in 1960 and has led Australian teams all over the world for more than 30 years.

Without a doubt Tunstall has had more influence than any other person in amateur boxing in Australia. This has not only been on the administrative and technical side but also he has directly influence the development of many boxers including dual Commonwealth Games gold medallist Tony Madigan and world champion Jeff Fenech.

Since 1969 when Tunstall became Secretary/Treasurer of the ACGA, he has had more influence than any other individual on the development of the Commonwealth Games movement in Australia. During most of his 30 years in this position, he was responsible for the day to day administrative work involved in preparing and sending the Australian team to the Games.

In the early days as Secretary/Treasurer, Tunstall did most of the administrative and team preparation work from his home on the proverbial dining room table until 1986 when the ACGA was able to purchase a building of its own.

He was responsible for venue inspection, fundraising, promotion, government relations, selection guidelines, the appointment of technical officials, accreditation, team administration and planning, health matters, and providing direction and advice on the bidding for the hosting of Commonwealth Games in Australia.

As the Australian delegate on the Commonwealth Games Federation (CGF) since 1972, he served on the CGF Advisory Board, and was a Member of the Sports and Finance Committees. He was elected Vice President for Oceania on the CGF in 1994 for a four year term.

He has always been at the forefront in standing up for the Commonwealth Games particularly when outside influences have sought to direct it, whether it be the government in relation to selection, or the professional advertisers seeking to use the images of athletes without permission.

He has raised many thousands of dollars to send Australian athletes to the Games and kept overheads to a minimum. His management approach has always been based on what was in the best interest of the athletes and their performance.

In 1979 he was made an Officer of the British Empire (OBE) for his services to boxing.