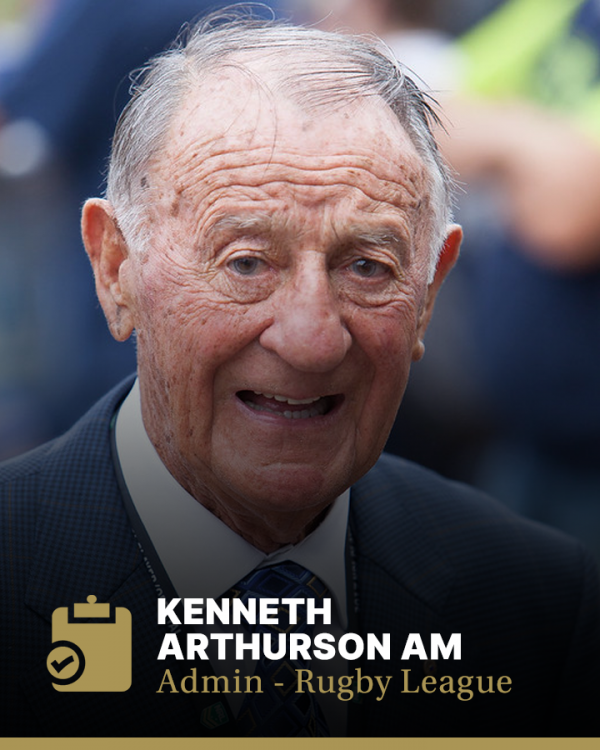 Kenneth Arthurson AM was inducted into the Sport Australia Hall of Fame in 2010 for his contribution to administration in the sport of rugby league.

Ken Arthurson’s record as a player (sadly cut short by injury at age 24) and as coach of Manly Warringah (1967-61) would have themselves earned him a place in rugby league folklore, but it was as an administrator that he put his stamp on the game. He was secretary of Manly for 20 years and later President. He was Executive Chairman of the Australian Rugby League from 1983 to 1997 and is credited with paving the way for the game’s growth by reorganising it on more businesslike lines. He was also Director General of International Rugby League from 1985 to 1997.

Ken Arthuson began his rugby league career as a 16 year-old with Freshwater Surf Life Saving Club’s D-grade side, enjoying a Premiership in 1945, his first year. He was a member of the Premiership-winning C grade team the following year and played in B grade and A grade premiership teams over the next two years. He joined Manly Warringah in 1948.

In 1953 he joined Parkes as player-coach but in his first season there injury ended his playing career. He was only 24.

Unable to play, he returned to Manly Warringah in 1954 as coach of the third grade team graduating to coach of the reserve grade the following year and coach of the senior side from 1957-61.

At this time he was also Administrator of the Police College at North. With this background in administration he was elected to the committee of Manly Warringah in 1956 and in 1963 took over the role of full-time Secretary. It was to be the beginning of a long and highly effective career in rugby administration. He served with Manly as secretary until 1983 and from 1968 to 83 also served on the Board of NSW Rugby League.

In 1983 he took over as executive chairman of the Australian Rugby League, a position he held until 1997 and one which had a major impact on the development of the game in Australia. He is widey credited with raising the standard of professionalism of rugby administration and helping to build the foundations for the game’s growth. For much of this period (1985-97) he was also Director General of the International Rugby League Board.

In the mid-1990s Rugby League was embroiled in a protracted and divisive wrangle over the formation of a Super League, backed by News Ltd. In 1997 Ken Arthurson, who had led much of the resistance to Super League, stepped down to help facilitate a settlement. His role, however, in shaping Rugby League in Australia remains universally acknowledged.