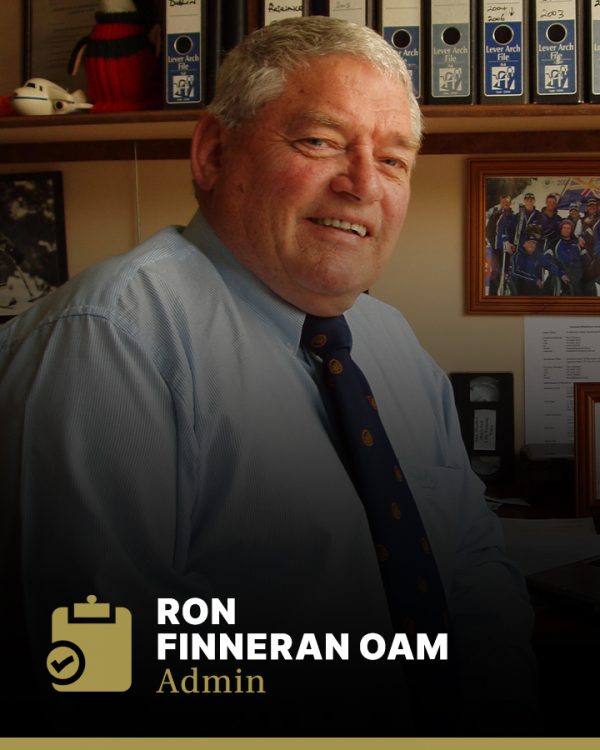 Skiing for people with disabilities was introduced into Australia by Ron Finneran in 1974, who had become a competent disabled skier through training programs in Canada and the USA. He contracted polio at the age of 18 months, resulting in his being permanently disabled with spina bifida.

He was appointed by the New South Wales government as its first public relations officer to specifically promote sport for people with disabilities and to search out new opportunities for the disabled in this field.

In 1976 he travelled to Sweden at his own cost to represent Australia as our one-man team in the inaugural Winter Paralympic Games in Ornskoldsvik. He continued to live and study in Sweden, a country where only cross-country opportunities were available for disabled skiers. Finneran set up an alpine ski program, organising instruction for recreational and competitive skiing and establishing the nucleus of an instruction manual.

He returned to Australia in 1978 to work in the Thredbo snowfields. He then established the Australian Disabled Skiers Federation (ADSF) with strong support from the Thredbo Ski School. From 1978 until 1984 (when government funding became available for staff) Finneran administered the ADSF and nurtured its growth in a voluntary capacity.

In 1979 he was responsible for the ADSF becoming affiliated with skiing’s generic sporting body – the Australian Ski Federation (now Ski & Board Australia).

In 1980 Finneran convinced the Australian Ski Areas Association (ASAA) to allow a 50% concession on lessons and lift tickets to ADSF members at all Australian ski resorts – an arrangement that still exists today. Finneran’s presentation was so strong that the ASAA’s offer was initially free of charge to ADSA members – an offer refused by Finneran who believed that the skiers should only have assistance not charity.

He established regular seminars for professional ski instructors to introduce them to disabled skiing, funded by grants from the Australian Sports Commission.

From 1980 to 1989 he served as a Member of the Alpine Skiing Technical Committee of the International Sports Organisation for the Disabled (ISOD) until it was disbanded. In 1982 he was elected President of the ADSF and until 1992 was delegate to the Australian Sports Council for the Disabled, until it too was disbanded.

In 1984 he was appointed the national Executive Director of the ADSF, a position he still holds, making him Australia’s longest serving professional administrator in disabled sport.

From 1984 to 1988 he was a Member of the Advisory Committee to the Australian Bicentennial Authority’s National Disabled Sports Program and from 1987 to 1992 he was Chairman of the NSW Advisory Committee for Athletes with a Disability.

In 1988 he worked jointly with the Australian Professional Ski Instructors’ (APSI) on the inclusion of disabled skiing in APSI’s instruction handbook. Australia was the first country in the world to make this move. As a result of this, Australian instructors are now trained in teaching the disabled as part of their qualifications.

In 1992, after years of fund raising and lobbying for government assistance, the ADSF finished building it’s own ski lodge in Jindabyne, specifically designed for use by people with disabilities. The lodge is named Finsko’s Lodge to acknowledge the major effort made personally by Finneran to achieve this undertaking. Further to this, the Jindabyne Winter Academy was established to support elite and talented alpine skiers, both able bodied and disabled.

From 1992 to 1998 he was a Member of the Alpine Technical Committee, part of the International Olympic Committee and in 1993 he was elected President of the APF and was Chairman of the Bid Committee for the 2000 Sydney Paralympic Games.

Since 2000 Finneran has been a Member of the APC’s Joint Management Committee for Wintersports and since 2003, he has been a consultant/advisor to Thredbo and Perisher Blue ski resorts for their access management programs and OH&S procedures in regard to lift excavation and on off loading on chair lifts.

In 2004 Finneran was awarded the Medal of the Order of Australia (OAM) for his service to sport for people with disabilities as an administrator and competitor.