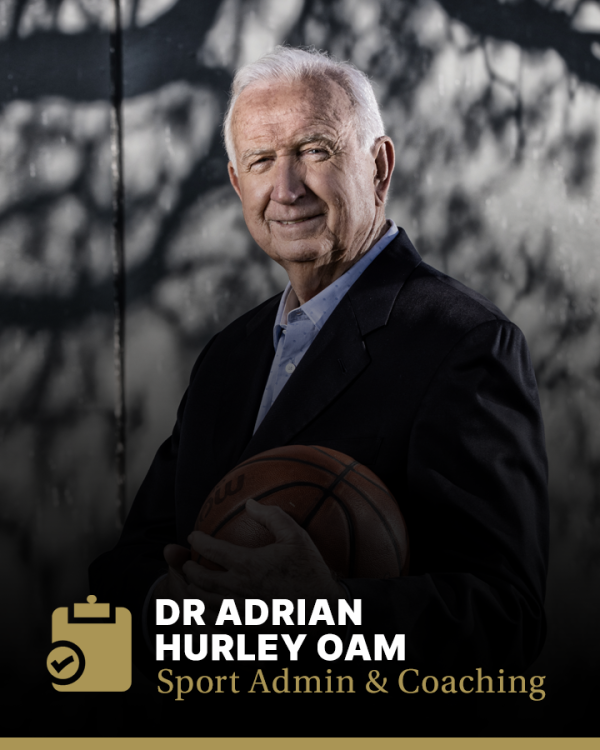 Dr Adrian Hurley OAM was inducted into the Sport Australia Hall of Fame in 2022 as a General Member for his contribution to the sport of basketball through administration and coaching.

One of the most significant coaches in Australian basketball history, Adrian Hurley had a profound impact on the sport and its top-level participants across four decades.

Hurley would play the key role in establishing the Australian Institute of Sport basketball program.

He served as the head coach or assistant coach of the national team for more than a decade and would become the first Boomers coach to take an Australian team through to the medal rounds of an Olympics, finishing fourth in Seoul in 1988.

He led the Perth Wildcats to the 1995 NBL championship, was NBL Coach of the Year in 2004/05 and was inducted into the Australian Basketball Hall of Fame as a coach in 2004.

Adrian Hurley’s lifetime association with basketball started with his own considerable playing career, representing and captaining New South Wales as the game began to boom in the late 1960s and early 1970s.

But his natural progression to coaching saw him play a role in further transforming the game and its participants in the decades after playing career ended.

Many of his philosophies and strategies in basketball and leadership were formed when he spent time during the early 1970s at the University of Oregon, where he gained his Doctorate of Philosophy and a Master of Education degree.

On his return, ‘Doc’ Hurley, as he was known, began coaching the Illawarra Hawks in the state and Australian championships. He would go on to coach Illawarra in the second season of the National Basketball League in 1980, taking them to a sixth place finish.

Hurley was the inaugural Head Basketball Coach of the Australian Institute of Sport in 1981, a role he held for 12 years. He established the AIS program and the National Intensive Training Program, which supported the establishment and running of elite basketball programs within the states. He also acted as a mentor to a generation of basketballers who came to Canberra in the pursuit of success.

He coached the AIS women’s team, which consisted of junior age players, to victory in the Australian women’s club championship in 1987.

In 1981 he was appointed assistant coach of the Boomers – a role he also held at the 2016 Rio Olympic Games.

In 1985 he was appointed Australian coach in 1986 and he would lead the Boomers to two Olympic Games and two world championships.

His Australian team finished outside the top 12 at the 1986 world championships, but the progression was swift with his talented Boomers making a bold statement two years later. In 1987-88 Hurley led the Boomers in Australia in two six match record breaking attendance series against the world power USSR, igniting the sport nationally.

Hurley’s Boomers became the first Australian men’s Olympic basketball team to reach a medal playoff, at the 1988 Seoul Olympic Games. Ultimately they went down to the might of the United States 49-78 in the bronze medal match, but the coach couldn’t be prouder of his team.

He would say: “We came out ready to play and when you look at what they achieved in this competition they should be very proud. But it was also a valuable lesson on what can be and must be achieved if Australia is to join the elite at the top of the basketball world.”

The Boomers, under Hurley, went on to finish seventh at the 1990 world championships and sixth at the 1992 Barcelona Olympic Games.

He left the AIS and the Boomers in 1993 to become head coach of the Perth Wildcats. At the time of his departure the AIS Basketball program was regarded as one of the best in the world.

The Perth Wildcats finished NBL runners-up in his first season. They won the 1995 championship, defeating the North Melbourne Giants in the third and deciding game.

Their clean sweep of the 1995 season included the NBL pre-season series, the minor premiership and the NBL title before going on to finish third in the World Club Championships and being the first Australian team to play an NBA team when they played the Houston Rockets.

He left the Wildcats after the 1997 season but his on-going passion for coaching and basketball saw him take over the Hunter Pirates for two seasons in 2004-05 and 2005-06.

He was named NBL Coach of the Year in the first season for lifting the Pirates from two wins the previous season to 15 in his first season.

He also served as vice president of the World Coaches Association, president of the Oceania Region Coaching, Basketball New South Wales and the Western Australia Sports Federation as well as the chief executive of the Newcastle and Hunter Events Corporation. In his latter role, he was responsible for the 2001 Australian Masters Games and was a finalist that year for the Sport Industry Australia Administrator of the Year.

He was a member of a four person “Sport 2000” Task Force to recommend the directions of Australian sport beyond the 2000 Sydney Olympics.

He was admitted as a Life Member of Illawarra Basketball, Australian Basketball Coaches Association and Basketball Australia with his contribution to the game has been significant as a player, coach, historian, writer, administrator and mentor.

Part of his legacy to the sport was his two-volume book, Hoop High, A History of Australian Olympic Basketball, 1956-2000, which took in 13 years of research and more than 150 interviews. He has been a prolific writer of coaching materials, newspaper, and magazine columns.

He was awarded the Order of Australia Medal in 1990.