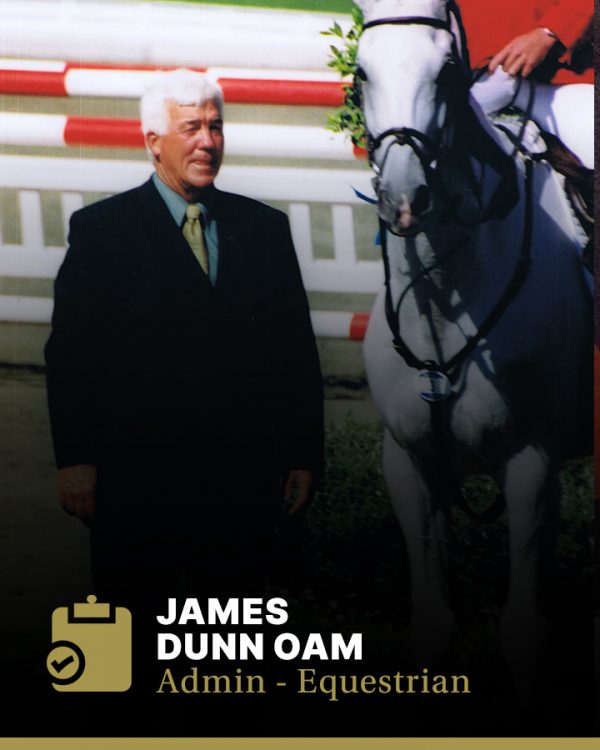 Jim Dunn’s role as Chef d’ Equipe (manager) of the Australian Three Day Event Team from 1993 to present has been one of personal effort to organise team logistics. This includes training and coaching schedules, horse veterinary inspections, travel to and from horse stables and training venues to accommodation. He has shown initiative in the overall plan of team tactics in consultation with the national coach, Wayne Roycroft, and team veterinarian, Denis Goulding. Indisputably, these three men have been the backbone supporting the athletes (riders and horses) that have gone on to make Olympic history in winning three consecutive gold medals in the Equestrian Team Three Day Event at Barcelona in 1992, then at Atlanta in 1996 and Sydney 2000 where Dunn joined the team in an administrative capacity. Dunn was also Chef d’ Equipe at the 2004 Athens Olympics.

Dunn’s career started when he was appointed Chairman of National Selectors (1989 to present) -a panel of five to seven people responsible for selecting the Australian elite list (potential Olympic / world championship rider / horse combinations) and the Long List / A List of up and coming combinations all selected to participate in a national coaching scheme aimed at continuing our gold medal successes and bring in younger riders and horses up to elite / Olympic level. Dunn has played a major role in this program. As team manager / selector, he is one of the final decision makers on the day of competition to decide on team composition versus individual places.

Dunn is also a past president of the South Australian Branch of the Equestrian Federation of Australia from 1988/89 to 1993/94 and a long serving member of that state branch committee from 1976 to 1997.

Dunn has more recently turned his talents to judging and has been a member of the grand jury at numerous international Three Day Events in Australia and is a qualified FEI International Judge for three day events and show jumping.

In 2004, Dunn was awarded the Medal of the Order of Australia (OAM) for his service to the development of equestrian sports in Australia and at Olympic level as a coach, manager, administrator and judge.