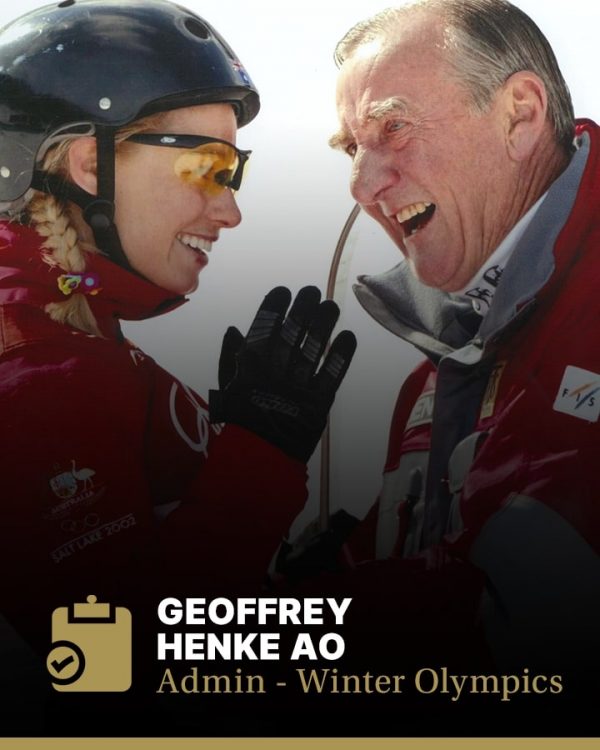 Geoff Henke AO was inducted into the Sport Australia Hall of Fame in 1993 as a General Member for his contribution to Winter Olympic administration.

Geoff Henke has made an outstanding contribution to sports administration in Australia, particularly the development of the Olympics and Winter Olympic sports.

Henke represented Australia in ice hockey for over 13 years, and represented Victoria nine times, captaining the team in 1959.

He was the first Alpine Director of the Australian Ski Federation (ASF) from 1972 to 1979.  While in this position, he was the General Manager of the Australian ski team to the 1975/76 World Cup.  He was a member of the Executive Board of the ASF from 1978 until 1983 and was Vice-President in 1982.  He was then made President in 1983, holding the position until 1989.  He was Chairman of the Organising Committee of the 1989 World Cup, the first Alpine World Cup to be held in Australia, at Thredbo.

From 1977, Henke was the Australian representative to the Federation Internationale de Ski (FIS) (the International Ski Federation is the body that controls world skiing) as an Alpine Conference Member until 1992.  Then in June 1992, he was elected as a FIS Councillor, becoming the first Australian to be elected to the FIS Council, retiring in 2006.

From 1977 Henke has represented the ASF on the Australian Olympic Committee (AOC) and has served on numerous Committees, including the Forward Planning Commission, the National Olympic Fundraising Committee, and the Marketing Committee.  He was made a life member of the AOC in 1992 and was Chef de Mission (general manager) of the Australian Winter Olympic Games teams to six Winter Olympics, from Innsbruck 1976 to Lillehammer 1994.

Henke has many other achievements to his name, including being the founder and developer of Dinner Plain, the only freehold land in the Victorian and Australian Alps, which is now a township in its own right.  In other ski administration roles, Henke represented the Victorian Ski Association on the Alpine Resorts Development Advisory Committee (ARDAC) from 1960 to 1966.  This body was directly responsible to the Victorian Government for the development of skiing within the state.  He was also a member of the Falls Creek Tourist Area Management Committee from 1962 to 1970 and a Commissioner to the Alpine Resorts Commission of Victoria (the statutory body that controls the Victorian ski resorts) from 1990 to 1995.  He is a life member of Falls Creek, Mt Buller, and Mt Hotham in recognition of being responsible for their establishment within Victoria.

Henke has held numerous other positions in Australian sport.  He was an inaugural Director of the Confederation of Australian Sport (CAS) from 1976 to 1982, and was Chairman of the Organising Committee of the World Track Cycling Championships held in May 2004 at Vodafone Arena, Melbourne.

In 1998, Henke received the International Olympic Committee Olympic Order for outstanding services to the Olympic cause, in particular his contribution to winter sports in Australia.  In 1999, Henke was made an Officer of the Order of Australia for his service to sports administration, particularly skiing, at national and international levels through the International Skiing Federation.