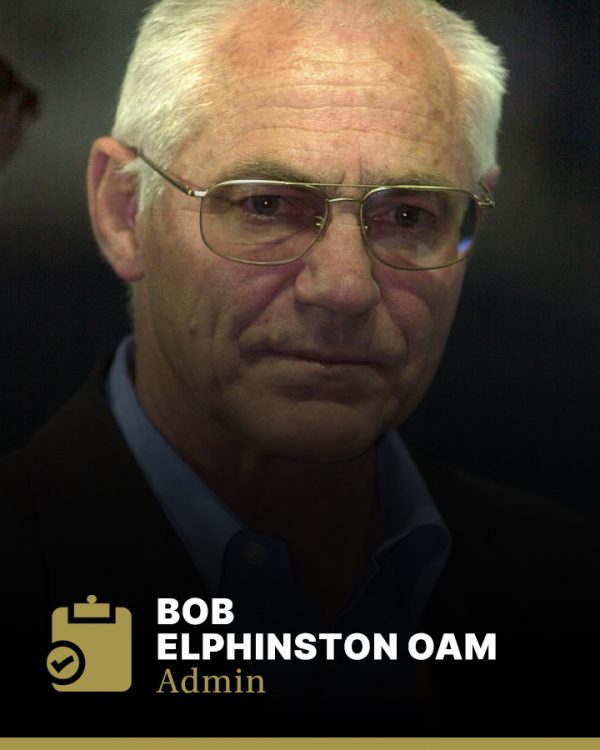 Bob Elphinston OAM was inducted into the Sport Australia Hall of Fame in 2006 as a General Member for his contribution to sport administration.

A lifelong fascination with sport has led Bob Elphinston to become one of the most respected sports administrators in the world. A former physical education teacher, where he enjoyed his first taste of basketball, Elphinston gained guidance, support and inspiration by being closely associated with great basketball mentors such as Lindsay Gaze and Adrian Hurley and players like Phil Smyth and Andrew Gaze. He coached club, district and state teams with great success, and oversaw the development and operation of the seven court Bankstown (Sydney) Basketball Stadium in Sydney during his 17 year term as President.

In 1991, Elphinston was appointed general manager for the Sydney Olympics 2000 Bid Company. His work was ultimately rewarded in 1993 when Sydney won the right to host the 2000 Olympic and Paralympic Games.

As SOCOG’s General Manager – Sport, Elphinston was directly responsible for ensuring the smooth running of the 28 sports at the Games. With 11,100 athletes from 199 nations, more than 8 million spectators and a world wide television audience of 3.9 billion, he personally rallied the cause of Sydney 2000, holding to it’s commitment of being the ‘athlete’s Games’.

In recognition of his significant contribution in bidding for and staging the ‘best Games ever’, the IOC appointed him to the IOC Evaluation Commission for the selection of the 2008 and 2012 Olympic cities. In October 2000, he was awarded the Olympic Order by the President of the IOC, Juan Antonio Samaranch.

Elphinston then joined the Australian Olympic Committee (AOC) as Director of Sport & Operations and was responsible for international relations, organising the Australian Youth Olympic Festival, and the ongoing development of sport in Australia. In October 2001, he was appointed secretary general of the AOC and was the Australian team administration director of the 2004 Athens Olympic Games. He acts as a consultant for the IOC and is actively assisting the IOC and future Summer and Winter Olympic Organising Committees and the Olympic Sports Programme.

Elphinston was awarded the Medal of the Order of Australia (OAM) in 2002 for service to sport through the Sydney Olympic 2000 Bid Company and the Sydney Organising Committee for the Olympic Games.