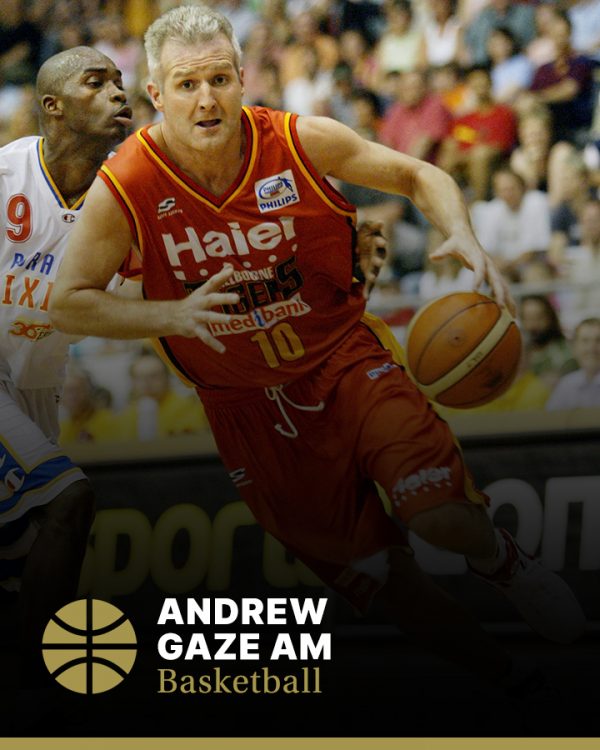 Andrew Gaze AM was inducted into the Sport Australia Hall of Fame in 2005 as an Athlete Member for his contribution to the sport of basketball.

Andrew Gaze remains among Australia’s most recognisable basketballers after playing 297 games for the Boomers in his 17 year international career. He competed in a record five Olympic Games – Los Angeles 1984, Seoul 1988, Barcelona 1992, Atlanta 1996, and finally Sydney 2000.

Gaze was honoured at the 2000 Sydney Olympic Games when he was chosen by the Australian Olympic Committee to carry the Australian flag in the Opening Ceremony. This was in recognition of his contribution to the Australian sporting community and his standing in the eyes of Australian’s.

Andrew retired from international basketball following the 2000 Olympics but continued his career in the NBL.

He played for the Melbourne Tigers from 1984 until 2005 and was still regarded as one of the best players in the competition at the age of 39 when he retired. In 578 games he scored 18,212 points at an average of 32 points per game.

He only ever played for the Melbourne Tigers and was only ever coached by his father Lindsay. Andrew was named Rookie of the Year when he made his debut with the Tigers in 1984 and from then led the team to two national titles in 1993 and 1997. He was captain of his team every year from 1985 and earned the highest NBL MVP votes for his club every year for 18 years in a row from 1984 to 2001.

Gaze will always be remembered as one of Australia’s greatest basketballers but he is also well known in America where he led Seton Hall University to the NCAA final against Michigan in 1989.

He also had two stints in the American NBA where he was a member of an NBA Championship team with the San Antonio Spurs in 1998/99, and played professionally in Greece and Italy.