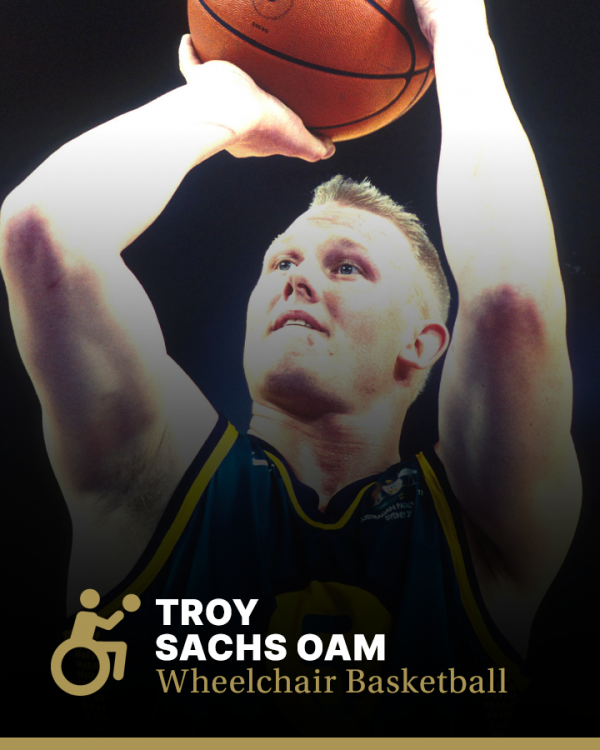 Troy Sachs OAM was inducted into the Sport Australia Hall of Fame in 2017 as an Athlete Member for his contribution to the sport of Basketball.

Troy Sachs was widely considered Australia’s most dominant wheelchair basketball player to take the court in his time and for a time the best in the world. His performances at the Paralympics were world-class and hit a high note at the 1996 Atlanta Paralympic Games, with a world record 42 points to win the gold medal against Great Britain. Sachs finished his career as a five-time Paralympian with two gold medals and a silver in Athens 2004. His ability was recognised abroad in 1998 when the Dallas Wheelchair Mavericks signed Sachs before going on to win the next three USA national championships. His professional career took him to Italy, Germany and Turkey where he also enjoyed success -as he did over the years playing with local team in West Sydney.

Sachs was born in Bulli without a tibia and a deformed right foot, which led to the leg being amputated below the knee before he turned three.

He was introduced to wheelchair basketball in 1990 as a 15-year-old and it started at a very grassroots level with a long five-hour round trip down the highway from his family home in Bulli three times a week with his brother to the nearest training facility.

It was only two years later he made his debut for the national team, the ‘Rollers’ before making his Paralympic debut that same year at the Barcelona Games in 1992.

He found himself at the elite level very quickly and performed when it mattered most at his second Paralympic Games in 1996 scoring 42 points to help the Rollers win gold. That season he also won the Australian national league MVP award with the Western Sydney Slicks.

From there Sachs signed with the Dallas Wheelchair Mavericks, winning the next three US national championships with the team and earning All-Star selection in the first two years.

At the Sydney 2000 Paralympic Games, he was captain of the Rollers who placed fifth in the same year he was awarded the Australian Sports Medal for his performances in the green and gold.

It was Italy next for Sachs, signing with Tabu Cante where he helped the team finish first and third in the European League before playing with RSC Rollis Zwickau who were crowned German Cup Champions in 2003.

Sachs’ fourth Paralympics ended with a silver medal in Athens 2004 as the Rollers succumbed to Canada in the final match, but he was able to add another Olympic gold medal to his trophy cabinet in Beijing four years later with the 2008 Australian Paralympic Team.

Unsurprisingly, he was the only player in China who had won Paralympic gold 12 years prior. His career finished with two seasons at Turkish team Galatasaray before going on to coach junior teams in New South Wales and continue his work as a personal trainer with his own business ‘Team Sachs’.