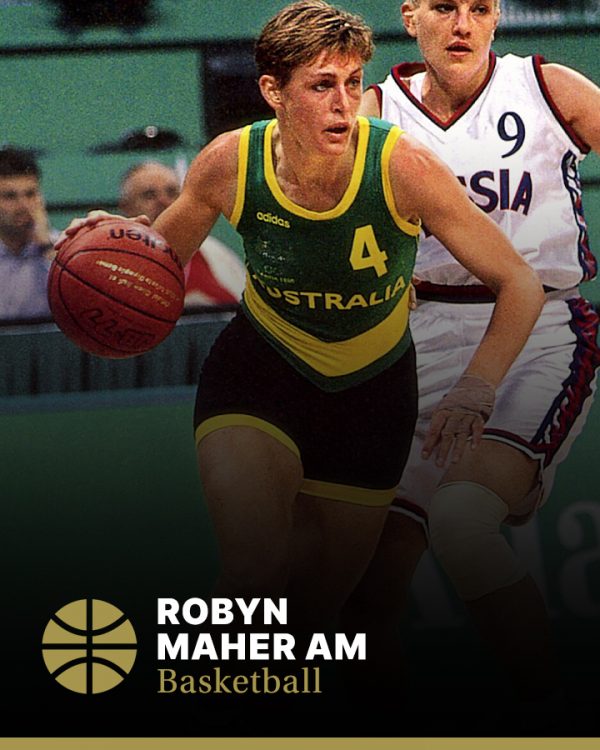 Robyn Maher AM was inducted into the Sport Australia Hall of Fame in 2018 as an Athlete Member for her contribution to the sport of basketball.

Maher remains one of the most decorated, influential and admired players in the history of Australian basketball, having represented her country at three Olympic Games and six World Championships. She captained the Opals to their first Olympic medal – a bronze at Atlanta 1996 – and to another bronze at the 1998 worlds in Germany. In all,  she played 374 games for Australia, 174 of those as captain.

Maher’s brilliant career lasted almost two decades, beginning with the Melbourne Telstars in the Women’s National Basketball League in 1981 and finishing in 1999 with the first game of the Maher Cup, an annual series of international games named after her in recognition of her pioneering contribution to the sport. A tenacious defender and team player whose leadership and court sense were features of her game, she featured in 13 Grand Finals for an astonishing 10 championships, six in seven years with Nunawading Spectres, two with Sydney Flames and one each with Hobart Islanders and Perth Breakers. She was the competition’s Most Valuable Player in 1983 and 1987, was named in the All Star 5 in 1988 and was awarded defensive player of the year in 1992 and 1994. She finished among the WNBL’s all-time top ten scorers.

She made her Olympic debut at Los Angeles in 1984, returning in Seoul four years later as the Opals began their steady climb up the rankings and was captain -her husband Tom Maher was coach -when the historic medal was achieved in Atlanta. She assumed the captaincy in 1989 and held it until her retirement, and was named international player of the year in 1998, 1990 and 1991.

Maher was inducted into the Australian Basketball Hall of Fame in 1994 and became a WNBL Life Member in 1997. She served on the Australian Olympic Committee’s Executive and as chair of its Athletes Commission. She was awarded the medal of Australia in 2002.