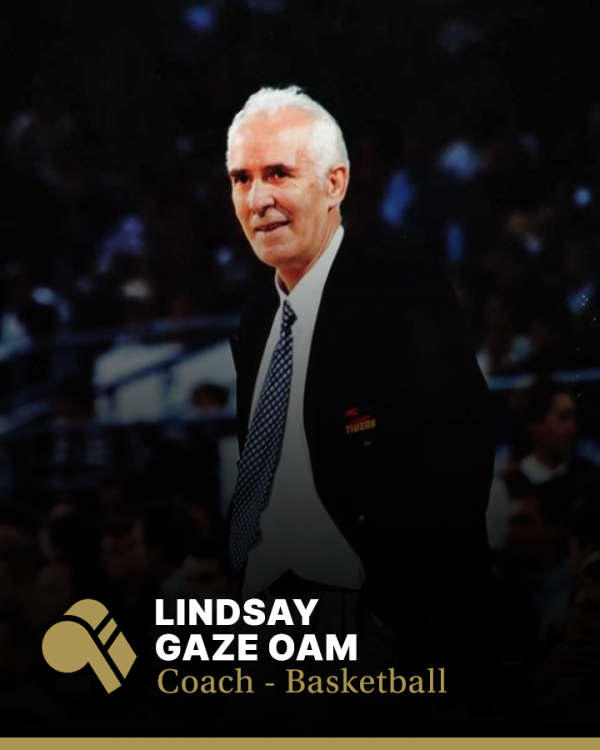 Lindsay Gaze is an institution in Australian basketball. His list of achievements both as a player and coach at the highest level of international competition has been unparalleled over 40 years.

As a player, he was selected for the Australian basketball team for the 1960 Rome Olympics which was the first Australian basketball team to travel overseas for a Games. Lindsay soon became one of Australia’s leading basketballers establishing an international reputation when he was selected as a member of the All-Star Five in the 1962 World Championships. He also played in the 1970 World Championships.

Lindsay represented Australia again at both the 1964 Tokyo Olympics and 1968 Mexico City Olympics. He developed a reputation as a fanatical trainer, training two or three times a week with his club and at home. Lindsay also coached national under 16 and under 18 squads during his playing career.

His reputation for training led to his appointment as the coach of Melbourne Tigers in 1970 where he coached for 35 years, including 22 years from 1983 to 2005 in the National Basketball League (NBL), winning two championships in 1993 and 1997. He was the coach of the year in 1989, 1997 and 1999 and is second in the all-time number of coaching wins in the league. Lindsay was also a member of the NBL Board and in 2004, he became part owner of the Melbourne Tigers with his son Andrew Gaze.

Andrew was coached by his father for his entire career as an NBL player with father and son announcing their retirement from basketball on the same day in May 2005. Lindsay retired having coached 689 NBL games for 363 victories. Andrew retired after playing 612 NBL games. The pair had formed the longest standing father-son partnership in the history of world sport. On Lindsay’s retirement, journalist Stephen Howell of ‘The Age’ wrote that “history would judge him as the most influential figure in Australian basketball”.

Lindsay is a member of the Australian Basketball Hall of Fame as both a player and coach. In 1985 Lindsay was awarded the Medal of the Order of Australia (OAM) for his service to basketball.