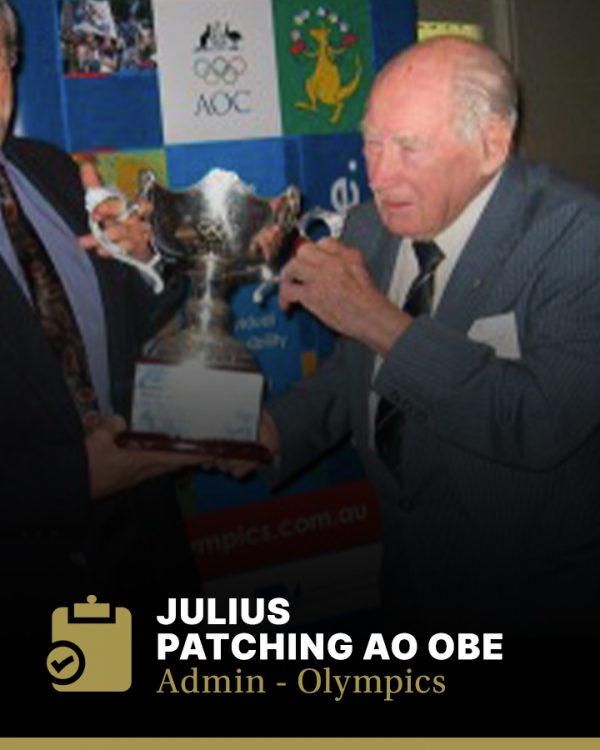 Judy Patching has seen more Olympic ceremonies than most Australians, and has acted in numerous positions throughout his involvement with the Australian team. He had the rare capacity to apply strong discipline in a warm, down to earth fashion.

The 2000 Sydney Olympics were Patching’s 12th consecutive Games. In 1956 he was chief starter and member of the technical committee, firing the gun that sent Betty Cuthbert on her winning way. In 1960 he was the athletics team manager, in 1964 the team’s assistant general manager, and in 1968 and 1972 he was Chef de Mission of the Australian team. From 1976 to 1988 he was present either as Secretary General of the Australian Olympic Federation or Secretary General of the Oceania Olympic Committee. He retired from the AOF in 1985. He was a delegate to the IAAF from 1960 to 1970, and is a life member of the VOC and the AOF.

His role as starter at the Melbourne Games was the beginning of an enduring association with the Games and Olympians. He did it all, swinging a favour for Herb Elliott in Rome 1960, talking around an unhappy Dawn Fraser in Tokyo 1964, watching Ron Clarke run himself to the ground and cautioning Peter Norman for his actions on the dais during the 200m sprint medal presentation in Mexico 1968. He was the man in charge in Munich when Shane Gould struck gold and terrorists forever shattered the athletes’ sense of security.

Patching has seen the Games transformed from an event no city wanted after the financial disaster of Montreal in 1976, to one that cities and their representatives have gone to great lengths to secure.

A former sailor who served in World War II in the Atlantic on HMAS Perth, Patching was an athlete in his younger days, a sprinter and hurdler, and was selected in the Victorian team just once for the 440yds hurdles. However was not granted leave from the navy so never competed for his state or country.