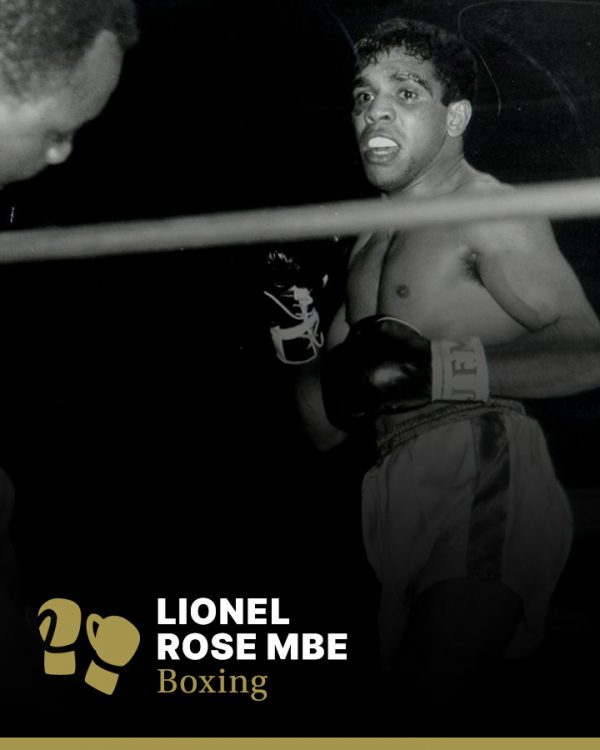 Lionel was the first Aboriginal to win a world championship in any sport and was only the second Australian to win a world title while still in his teens.

In 1963 at the age of just 15 he won the Australian amateur flyweight championship and was runner up to Bill Booth in 1964 for the Australian amateur bantamweight title, just missing a trip to the Tokyo Olympic Games. Later in 1964 he turned professional under the care of Jack Rennie and won his first professional fight against Italian Mario Magriss on September 9, 1964. After 19 fights for only two losses, he won the Australian bantamweight title from Noel Kunde on October 28, 1966.

He had only one defence of his Australian title, stopping Rocky Gattellari in 13 rounds on December 11, 1967, at Sydney Stadium. Everybody was behind Rocky but when Rose knocked him out the fans had a new hero. Rose relinquished the title when he became world champion in 1968.

He won the world bantamweight boxing title from Japan’s ‘Fighting’ Harada in Tokyo at the age of 19 on February 29, 1968. Harada was given advice that if he hit an aboriginal in the legs he would fall immediately. He ignored the advice and hit him in the head which had no effect. In the ninth round Harada had dropped to his knees with a short left punch to his chin, he then opened himself to more punishment.

Rose was accorded the biggest welcome of any Australian sporting champion after returning home from his title winning trip to Japan -an estimated 250,000 people jammed streets around the Melbourne Town Hall. He was even offered film roles. He successfully defended his world title twice, winning on points from Olympic bantamweight gold medalist Takao Sakurai in 1968 in Tokyo and Alan Rudkin in 1969 at Kooyong Stadium, Melbourne. He lost it on knockout to Ruben Olivares in Los Angeles on August 22, 1969. Rose gradually filled out to become a lightweight and fought Jeff White for the Australian title in 1970 in Brisbane, losing on points.

It was not quite the end of his world championship career. As late as May 1971 Rose was in the ring fighting for a world title, losing a controversial points decision to Japan’s Yoshiaki Numata in Hiroshima for the world junior lightweight championships. Rose announced his retirement after that contest.

He had compiled a record of 47 contests for 40 wins, 11 of them by knockout, and seven defeats, three by knockout.

On July 1 1975 Rose made a surprise comeback and, in Kuala Lumpur, out pointed Japan’s Shoji Uchida. Rose lost his next fight on points to top liner Blakeney Matthews of South Africa and lost the following fight on points to Sydney boxer Bill Moeller in a hotly disputed decision. On November 13, 1975 Rose stopped Italian Guiseppe Agate in Melbourne in a lackluster performance. After refusing a big money fight in South Africa, Rose went into temporary retirement again, then decided on a comeback in late 1976. On August 28, 1976 he was stopped in three rounds by Rafael Limon in Inglewood, California, and on December 17 he was stopped in two rounds by little known Maurice Apeag in Noumea. After that defeat Rose retired for good.

In 1991 a television mini-series ‘Rose Against the Odds’ was widely acclaimed, even the serious newspapers claimed that Rose and Dawn Fraser were ‘national treasures’.

Rose was a fast and tough fighter, possessing sharp lefts, and was a fine counter-puncher.

He won the ABC Sportsman of the Year Award in 1968, and became a Member of the Order of the British Empire (MBE) in 1968. He was inducted into the World Boxing Hall of Fame in 1995.