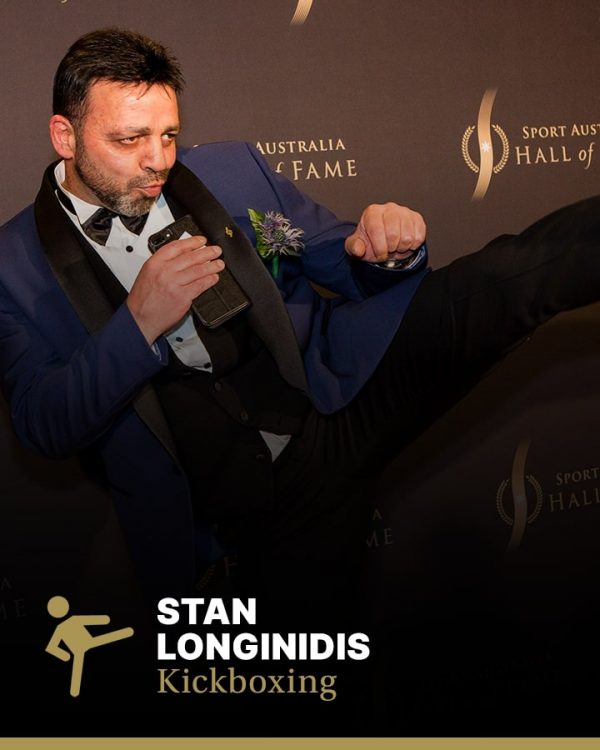 Stan Longinidis was inducted into the Sport Australia Hall of Fame in 2013 as an Athlete Member for his contribution to the sport of kickboxing.

If emerging Australian kickboxing needed a true hero to give it profile and stature, then Stan “The Man” Longinidis was the one to do it. From 1989 when he became US Heavyweight Champion to 1998 when he won the last of his World titles, Stan Longinidis constantly posed himself fresh challenges, winning world titles in three styles and three weight divisions (including super heavyweight).

He was crowned by the King of Thailand personally when he became the first Westerner to win the Muay Thai title.

Born in Melbourne on June 25, 1965, the son of Greek parents, Stan Longinidis took up kickboxing seriously in 1983. He progressed quickly, winning the Australian Amateur Super Heavyweight title in 1984.

Kickboxing at that time had a relatively low profile in Australia and it was not until he challenged for the World Light Heavyweight title in 1987 that he began to attract attention. That fight ended in a draw but led to an invitation to move to the USA where he scored 18 successive victories on the way to taking the North American and USA heavyweight titles in 1989.

He continued to win more titles and in 1996 he united two global strands of kickboxing by becoming the first Westerner to win the WMC World Heavyweight Muay Thai title. The fight took place before 80,000 fans in Bangkok and the title was personally bestowed on Longinidis by the King of Thailand.

A serious knee injury interrupted his career in 1997. He returned after a reconstruction operation and though he scored a number of impressive victories he never quite regained the destructive dominance of his peak years. He retired in 2003 with a record of 83 wins, eight losses and four draws from his 95 fights.

A devout Christian, Stan Longinidis is today a motivational speaker. He also campaigns against violence and bullying with the message that it takes a strong man to walk away from a fight he knows he can win.

2000: Awarded a Lifetime Achievement Award in France for his role in building the profile of kickboxing