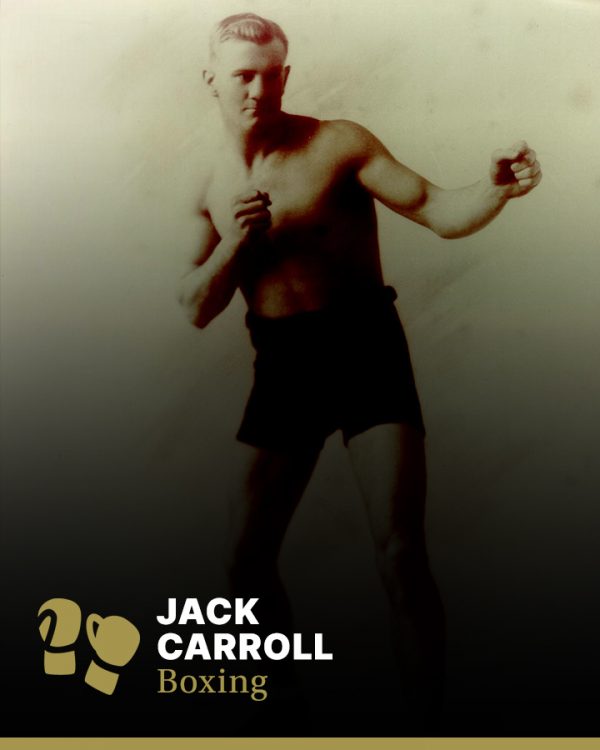 Born Arthur Hardwick, ‘Jack Carroll’ was the real name of a friend who fought as ‘Charlie Ring’ and Hardwick assumed it to mislead his father, who disapproved of fighting. He fought eight times before his family realised he was a boxer. As a youth, he was simply a walk-up, tough slugger trained by Billy McWilliams of Carlton who was no devotee of style. Carroll transferred to Bill O’Brien of Flemington in 1923 who completely changed his approach.

‘Red’ Carroll, who became known as ‘the red fox’, emerged as an unorthodox, perplexing fighter who baffled his opponents with his speed and variety of punches. Flicking, slapping, evasive and aggressive by turns, Carroll put together a series of long winning streaks. He won the Australian welterweight title from Al Burke in Sydney in March 1928 and, although this title was claimed by others after Carroll lost a non-title bout to Charley Purdy in December, he remained the effective champion until he ‘regained’ the title in 1933, holding it until 1938 when he retired. Carroll’s loss to Fred Henneberry by 13 round knock-out in February 1932 was the last defeat he suffered. He beat Henneberry twice subsequently and many leading welterweights and middleweights, winning 30 of his last 33 fights (one draw, two no contests).

Always fit, Carroll was undoubtedly a world-class fighter. In 1934 he beat Billy Townsend who claimed the world junior welterweight title and he defeated world-ranked welterweights Bep Val Klaveran (twice), Jimmy Leto (three times) and Izzy Jannazzo to become the number one contender for the world title held by Barney Ross. Whether Carroll could have beaten Ross is still debated. A match between them was seriously mooted but promotional difficulties prevented it. Rumour has it that the world light heavyweight champ Maxie Rosembloom warned Barney that he would lose his title if he took up the challenge against the Australian.

In his prime the average attendance to his fights was over 20,000. In the later stages of his career Carroll had difficulty in making the welterweight limit of 10 stone 7 pounds (67 kg) and his punching technique would have been penalised in America. Carroll himself did not think an all-out pursuit of the title worthwhile: ‘I’m such a bad traveller that I’m sick from the time I start travelling to the time I finish’.

Carroll retired in 1938 with a house, a car and savings – one of the few Australian boxers to achieve financial stability through the sport. Carroll fought 109 times, winning 90 fights (42 by knockout), losing 12, drawing five, and two no contests. He returned to manual work on the Melbourne wharves, trained fighters without notable success, and was a skilled referee.

Homely in appearance, reserved by temperament and not a knock-out puncher, Carroll nevertheless became a legendary figure in Australian boxing, probably because he symbolised the virtues of the ‘battler’ in an era of limited opportunities.