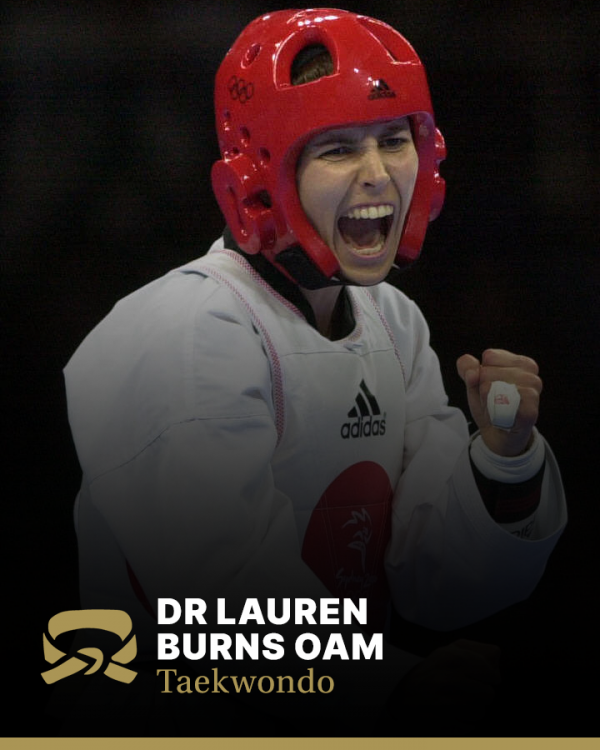 Lauren Burns OAM was inducted into the Sport Australia Hall of Fame in 2017 as an Athlete Member for her contribution to the sport of Taekwondo.

The first taekwondo athlete to be recognised in the Hall of Fame, Burns won Australia’s first Olympic Gold medal in Taekwondo when the sport made its debut at the Sydney 2000 Olympic Games. A 12-time national champion between 1993 – 2000, Lauren also achieved bronze medals at the 1996 World Cup and the 1997 World Championships.

Lauren Burns was born to showbiz parents Ronnie Burns and Maggie Stewart and as a teenager she followed her brother to taekwondo classes and surprisingly to her family, pursued the sport.

She began taekwondo, a sport that has its roots in ancient Korean martial arts, under teacher Joon No and later, as her competitive aspirations grew, moved to train with head instructor Martin Hall at Hall’s Taekwondo Centre. She eventually achieved the rank of 3rd Dan black belt.

In 1996, Burns claimed a bronze medal at the World cup before winning a bronze medal in the bantamweight division at the world championships in Hong Kong a year later.

In the lead-up to the 2000 Olympics she opted to train in the sport’s home country of Korea, as she had done multiple times throughout her career, while under the guidance of Olympic coach Jintae Jeong. The daily training included a very physical and demanding schedule that included corporal punishment for mistakes. Burns worked with Jeong as part of the Olympic Athlete Program but always maintained sessions with long-time club coach Hall, who was also alongside her in Sydney as an assistant coach.

Her development continued with a gold medal at the US Open taekwondo competition in 1999.

Burns won the Olympic gold medal in taekwondo at the 2000 Summer Olympics in Sydney competing in the women’s under 49kg class, defeating Cuba’s Urbia Melendez Rodriguez 4-2 in the final. The atmosphere in the State Sports Centre was intense for the entire day of competition with the noise of support for Burns’ fights a newsworthy footnote to the competition. She was one of only three Australian women who won individual gold medals at the Sydney Games alongside Cathy Freeman (athletics) and Susie O’Neill (swimming). The following year she published her best-selling book ‘Fighting Spirit: From a charmed childhood to the Olympics and beyond’.

2001: Awarded the Medal of the Order of Australia (OAM)
2015: Inducted into the International Taekwondo Hall of Fame