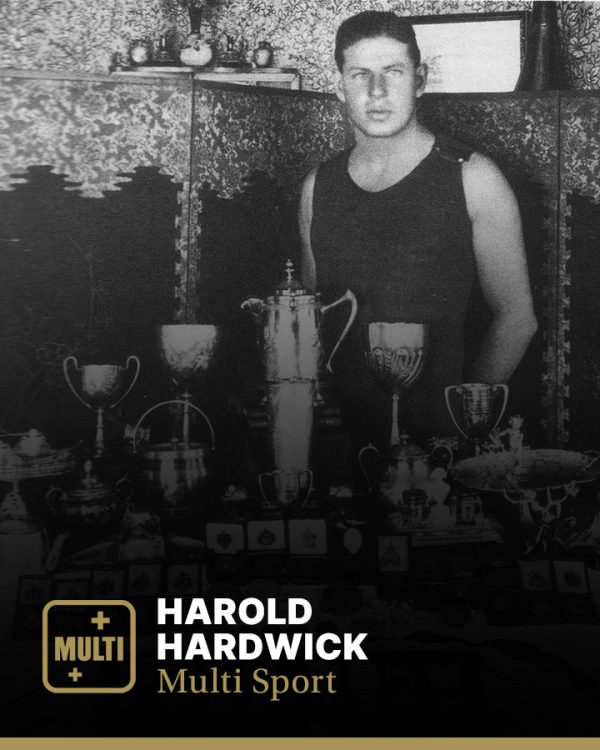 Harold Hardwick, an all rounder in the fashion of ‘Snowy’ Baker, won an Olympic gold medal and three Australian freestyle swimming championships, played rugby union for New South Wales in 1910, was a first class gymnast, surfer and water polo player, and later became a professional boxer.

Hardwick’s father had taught him to swim with cork water-wings as soon as he could walk and he became a regular at Frederick Cavill’s baths. At 10 he began boxing lessons. From then on, he swam in summer and boxed in winter.

In 1904, while at school, Hardwick won several swimming championships, played in the first XV rugby team, and captained the winning lifesaving team. On leaving school, he was apprenticed to a process engraver and was later employed as an accountant. Training daily after work, he joined the Enterprise Swimming Club and in 1907/08 defeated Alick Wickham for the state 100yds freestyle title. The next season he won the state freestyle titles for the 100yds, 220yds and 300yds, and for the ¾-mile and 1-mile events.

In 1911, aged 23, he was chosen in the Australasian team to travel to London for the Festival of Empire, held to celebrate the coronation of King George V. Although Hardwick was in the team primarily as a swimmer, he was persuaded to also nominate for the heavyweight boxing division. He had been taught to box by former professional Arthur Scott, had engaged in friendly spars and punched a heavy bag during training, but had never before boxed publicly.

Hardwick was intrigued by the swimming course that confronted him at Crystal Palace, site of the festival competition. It was an ornamental pool set in gardens, covered with thick reeds; potentially, at least, a place for goldfish rather than swimmers. The reeds impaired vision and threatened to tangle legs, and the course for his 100yds event had a crescent shape. Using a powerful crawl stroke with a four beat kick, Hardwick covered the distance in 60.6 seconds to beat Englishman John Derbyshire and Canadian Gordon Johnston. A couple of nights later Hardwick stepped into the ring to fight a giant English policeman, William Hazell, heavyweight champion of England and Scotland. The Australian, conceding 1½ stone, kept up a two handed barrage of blows for 2:33 seconds after which the referee stopped the fight to save Hazell from further punishment. One hour later Hardwick took on another policeman, Canadian Julius Thompson, who lasted only two seconds longer than Hazell. Thompson was dazed and staggering when Hardwick stepped back, refusing to hit him again, and the fight was stopped.

Hardwick, with his double in boxing and swimming, was Australia’s only winner at the Festival of Empire. He went on that summer to win the English 220yds and 440yds swimming titles and the 100m championship of Germany. Soon after his return to Australia, he was named as Australia’s recipient of the Helms Foundation award.

Hardwick was disappointed later in 1911 to learn that the IOC, after pressure from the Swedish organisers, had deleted boxing from Stockholm’s Olympic program. It was the only time the sport was ever excluded from the Games. However, his continued good form in the swimming pool in the summer of 1911/12 at least assured Hardwick of selection as a swimmer.

Competing in the 4x200m freestyle at the Games, Hardwick teamed up with Cecil Healy, Les Boardman, and New Zealander Malcolm Champion. Regarded as a symbol of world swimming supremacy, the Australasian men swam in the final against the United States, Great Britain, and Germany -with the Americans the favourites. Billy Longworth’s absence due to illness was estimated to have cost the Australians around 10 seconds, but they still downed the American squad by more than 15m in world record time. In the heat, Hardwick swam first, followed by Champion, Boardman, and Healy. In the final, Hardwick and Healy swapped places.

Hardwick also contested the 100m, 400m, and the 1500m, giving himself 10 races in seven days. As well as his gold medal in the relay, he also won bronze in the 400m and the 1500m. Hardwick had the distinction of being the only swimmer at the Games to compete in all freestyle events.

With the onset of war, Hardwick enlisted in the Australian Imperial Force on August 25, 1917. He served with the No.2 Signal Squadron in the Middle East. In April 1919 at the Inter-Theatre of War boxing tournament at Aldershot, England, he won the heavyweight boxing title. Chosen by his fellow competitors, he was awarded a cup for the ‘Ideal Sportsman’ of the British forces, an honour he highly prized. At the Inter-Allied Games held outside Paris he was a member of the victorious Australian team in the 800m relay. He returned home in August and was discharged from the AIF on October 14.

When Hardwick’s application for reinstatement as an amateur was rejected by the New South Wales Amateur Swimming Association he gave up competitive sport. In 1920 he joined the Department of Education as supervisor of swimming and was responsible for organising holiday swimming schools throughout the state. He was foundation president (1949) and a life member (from 1952) of the Union of Old Swimmers.

Boxing, gymnastics, water-polo and lifesaving were Hardwick’s other main interests (he was a foundation member of the Manly Surf Club), but he also played rugby union for New South Wales against a visiting American universities team in 1910 and was a member of the Eastern Suburbs premiership team in 1913. In 1914 he won the state amateur heavyweight boxing championship and in 1915 signed up with ‘Snowy’ Baker for eight professional fights, of which he won four. In his last bout on February 19, 1916, he was knocked out by Les Darcy in the seventh round, though not before he had broken two of Darcy’s teeth.

Likeable, generous and unassuming, he was the quintessential sportsman. He is commemorated by the Harold Hardwick memorial trophy awarded annually to the winner of the New South Wales 100m schoolboys’ title. It bears the inscription, ‘In memory of a great sportsman, soldier and gentleman’.