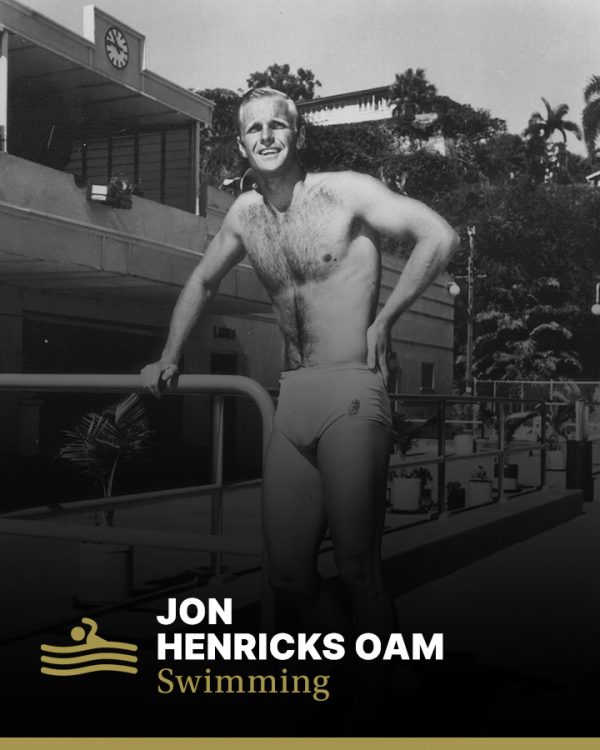 Having established his swimming prowess from the tender age of 11 in 1946, when he won a Cub Scout race at the Balmain Baths, Jon Henricks ultimately proved himself to be the fastest swimmer of his time when he won the 100m freestyle sprint at the 1956 Melbourne Olympic Games.

These Games were historic for the Australian swimming team, which pulled off a coup by winning every individual freestyle event – both men’s and women’s – as well as the relays and the men’s backstroke. In the 100m, Henricks beat his fellow countrymen John Devitt and Gary Chapman and set a world record. He won a second gold medal as a member of the 4x200m freestyle relay team, which also set a world record.

Tall, with superb physique and a then fashionable blond crewcut, Henricks had a memorable lead into the 1956 Games. While he started out his swimming career as a distance swimmer – and won the 440yds race at the 1951 Australian nationals – his omission from the Australian team for the 1952 Helsinki Olympics saw him take up sprint events instead. He won the national 100m championship four years in a row from 1953, and the 200m in 1953 and 1954. After a successful tour of Japan in 1953, during which he smashed a number of local records, he won three gold medals at the 1954 Vancouver Commonwealth Games in the 100yds freestyle, the 4x220yds freestyle relay, and the medley relay.

He enrolled with the University of Southern California (USC) after the 1956 Olympics, and the USC team won its inaugural indoor nationals title with just five swimmers. Swimming alongside compatriot Murray Rose, Henricks helped USC to two more NCAA titles during his four-year college career. He went to Rome with the Australian team for the 1960 Olympics, but a virus cost him the chance of further gold medals. Henricks swam well outside his best times and failed to reach the final of the 100m, as well as being forced to withdraw from the relay. In 1958, Henricks won the US Long Course 100m and 200m, in the process breaking the US record in both.