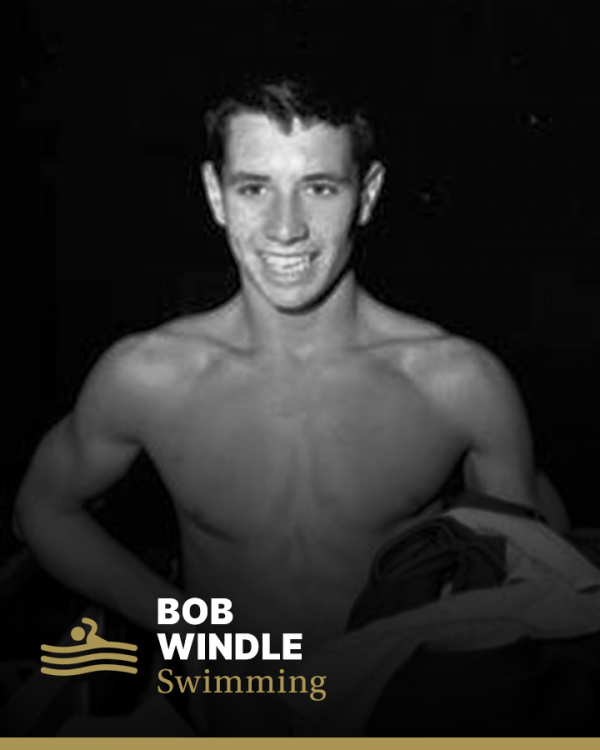 Robert ‘Bob’ Windle was inducted into the Sport Australia Hall of Fame in 1987 as an Athlete Member for his contribution to the sport of swimming.

Windle represented Australia at three successive Olympic Games – Rome in 1960, Tokyo in 1964 and Mexico City in 1968. He turned in one of the most courageous Olympic swimming victories in Australia’s history to hold off the world’s best 1500m swimmers to collect gold at the 1964 Tokyo Games.

Windle’s win in Tokyo was one of the upsets in the swimming pool, and was Australia’s third in a row in the 1500m freestyle. Murray Rose had won the race in 1956, and John Konrads in 1960. Four years earlier, Windle had been included in the team for Rome mainly for the experience, just as Konrads had been in 1956. He was 15 when he made that trip, but he didn’t compete. When he returned to Australia, he decided to join Konrads’ coach Don Talbot. Under Talbot, he developed into a swimmer with great versatility of distance, tackling anything from 100m to 1500m.

Windle, though proven over the 1500m, was more respected as a 200m and 400m sprinter and entered the Tokyo final as a distinct outsider. The world record holder American Roy Saari and fellow American John Nelson both qualified for the final and planned to pace each other and blot out the powerful Australian. With Talbot, Windle settled on a simple plan: clear out early and treat the race as a sprint. They correctly judged that Saari would be tired, having mixed water polo with his training before facing a grueling games program. Windle confused them by putting on an early charge and then sprinting away after 200m, forcing the Americans to chase. Windle pulled away from every challenge and Nelson finished second, with Saari second last after losing his rhythm.

Windle summed up the race later: “I busted myself in that first 100 and by the time the others realised what had happened it was too late. Then I just tried to keep it up; I knew if it came to a final spurt I could out kick everyone.” He led all the way to win in an Olympic record time of 17min 1.7sec.

In Tokyo he competed in three other events: the 400m, and the 4x100m (third) and 4x200m (fourth) freestyle relays. In the 400m, his ‘pet’ event, Windle misjudged his timing, he won the heat easily, but failed to gain a place among the eight fastest in that first round to qualify for the final.

Between Tokyo and Mexico, Windle went to Indiana to swim for Doc Counsilman. He helped his Indiana team win the NCAA Championship by anchoring the victorious 880yds freestyle relay.

He retired in 1967 but agreed to swim the shorter distances at Mexico in 1968 when Don Talbot talked him into a comeback.

At Mexico City in 1968, Windle finished sixth in the 200m freestyle final and swam in the 4x100m and the 4x200m freestyle relays, finishing third and second respectively.

Oddly enough, Windle won more Olympic medals (two) swimming relay 100s than in any other distance, yet the 100 was the only freestyle distance he failed to win (by a touch out) in the Australian Championships during his long career.