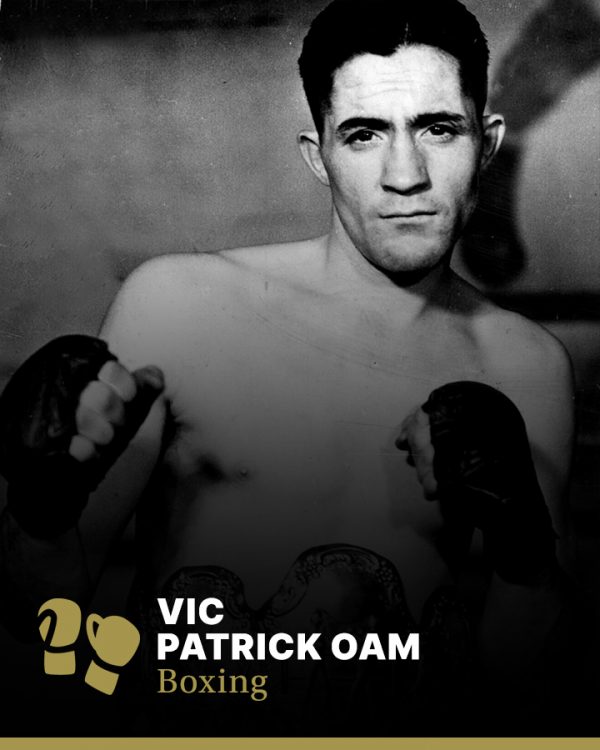 Victor ‘Vic’ Patrick, born Victor Patrick Lucca was Inducted into The Sport Australia Hall of Fame in 1986 as an Athlete Member for his contribution to the sport of boxing and was Elevated to “Legend of Australian Sport” in 1996.

Patrick was one of the greatest Australian boxers never to win a world championship. He held the Australian lightweight and welterweight titles at a time when those divisions attracted some of Australia’s finest talent, but he was deprived from fighting overseas by World War II.

The son of an oyster farmer, Patrick didn’t take up boxing until he was 20, when he discovered that a preliminary boxer could earn a pound for fighting four rounds, which was more than half a weeks pay. Patrick, a rangy, bony southpaw shock puncher who always fought with a charismatic head lean to the left, came under the guidance of the legendary Ern McQuillan and fought his first three bouts under the name Alf Edwards so his mother wouldn’t know he was boxing. He then fought under his Christian names Victor Patrick, a name he adopted by deed poll, perhaps because of the sensitivities surrounding World War II when Australia was at war with Italy. It didn’t seem to matter, he went on to become a genuine hero of Australian sport.

Patrick’s first fight was against Les Shocker at Sydney’s Carlton Stadium on January 24, 1940, Patrick winning by knockout in the first round. He won 18 of his first 19 fights by knockout before losing on a highly doubtful (and quite accidental) foul to American born veteran Tod Morgan, the Australian lightweight champion and former American world junior lightweight champion, at Leichhardt Stadium on June 5, 1941. Four weeks later, on July 3, 1941, he took the lightweight championship from Morgan and commenced a string of 16 consecutive wins (12 by knockout) before losing to Les Sloane. This loss is recorded in some record books as a knockout but Patrick retired due to an arm injury. Patrick and Morgan were to meet in the ring twice more, both decisions going Patrick’s way.

Patrick defeated the much heavier Ron McLaughlin in 1942 for the Australian welterweight title to become dual champion and in the second fight with McLaughlin, then a fully blown middleweight, conceded his tough opponent more than 9.5kg and won on points in one of his most grueling encounters. After the Sloane loss, Patrick won 10 more fights in succession (all by knockout) including a 3rd round knockout of Sloane. After knocking out Eddie Miller in defence of his Australian lightweight title, Patrick knocked out American Eddie Marcus and out pointed another American, Eddie Hudson. Patrick had also knocked out Tommy Burns in defence of his welterweight crown. He never lost a fight in defence of either title: he retained the lightweight championship until his retirement in 1948, but relinquished the welter in 1946.

Patrick was the sport’s biggest draw card during the golden era of the 1940s, regularly selling out Sydney Stadium, the old ‘tin shed’ at Rushcutters Bay. He joined the Australian Army during the War and was training virtually in his spare time and when he was on leave.

In 1946 Patrick had an incredibly mixed campaign. He began the year by accepting an offer for two fights in New Zealand. Still a natural lightweight he was continually giving opponents up to 7kg weight advantage. In his first New Zealand fight he easily stopped virtual middleweight Vic Calteaux in four rounds and then took on the New Zealand welterweight champion Bos Murphy in Wellington. Though the New Zealand pressmen were unanimous Patrick won easily, the fight went to Murphy on points. McQuillan announced that he would never take another fighter across the Tasman, a promise he kept until 1978. The strain of continually fighting bigger men was beginning to tell, and Patrick relinquished his Australian welterweight title after the Murphy loss to concentrate on lightweight contests.

One of Patrick’s greatest fights was against the great American Freddie Dawson on September 1, 1947. Dawson was the number two lightweight in the world, having fought a draw with Ike Williams in 1946. Patrick was definitely a shade past his best and Dawson, four years younger than Patrick, was on the crest of a wave.

The pair staged a classic battle with Dawson on top early. Patrick put Dawson on the ropes in the 5th round, squared the fight by the end of the 8th round, and dramatically floored Dawson in the 9th. Dawson continually poked his tongue out at Patrick, who knocked him through the ropes in the 11th round with his trademark left hook. It was his last, desperate effort. Dawson climbed back from the apron of the ring to survive the round, finally finishing the stronger of the pair to drop Patrick in the 12th and final round. When Patrick staggered to his feet, Dawson landed a right which left Patrick unconscious for three minutes.

One of the most unusual crowd reactions occurred after this fight. There were no cheers for the winner, not one person in the capacity 12,000 crowd moved while ambulance men attended to Patrick, and for at least five minutes after the beaten champion was taken from the stadium, not one person moved to the exits. Dawson was amazed at the silence and still could not comprehend when his chief second told him he had exploded the Patrick invincibility and the fans needed time to get over the shock.

After his defeat to Dawson, Patrick took a long break from the ring before returning to defend his lightweight title against Mickey Tollis in Melbourne. Though he was rusty, Patrick fought a cagy fight to earn a draw and had two more fights, defeating Roy Treasure by knockout in the 12th round and won on points against American Tommy Stenhouse, before retiring.

The knockout at the hands of Dawson was the last of only four defeats in Patrick’s 55 bout career and the only time Patrick was knocked out in any of his fights. Patrick won 43 of the 55 bouts by knockouts and had only four losses, the foul to Morgan, the arm injury to Sloane, Bos Murphy in New Zealand, Freddie Dawson, and one draw against Mickey Tollis.

Patrick was awarded the Medal of the Order of Australia (OAM) in 1987 for his service to boxing.