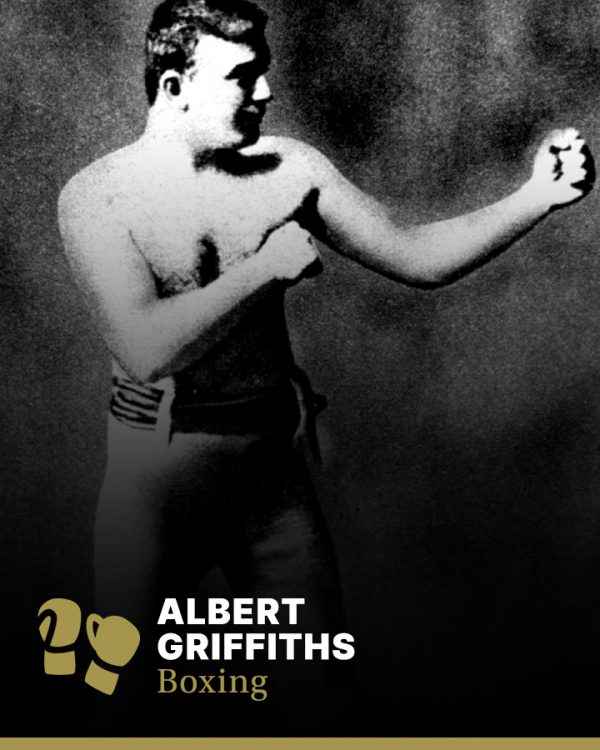 Young Griffo was at once Australia’s most brilliant and most outrageous prize fighter. World authorities such as America’s Ring magazine have since recognised Griffo as world champion.

He became world featherweight champion in 1890 when he defeated defending champion ‘Torpedo’ Billy Murphy of New Zealand in a Sydney contest. The bout was staged over 20 rounds and as both boxers entered the ring within the weight limit, plus the fact the bout was advertised as a world title fight, there can be no disputing that when Murphy took off his gloves at the end of the 14th round, advising the referee he could not continue, Griffo inherited the title. Before this fight, Griffo had already won the Australian title and a points win over Nipper Peakes in Melbourne in December 1889.

Griffo was a man of the most deceptive appearance. He did not look the defensive fighter. His build was rather that of a slugger. There was nothing to indicate his extraordinary speed. He was short and stocky, with a neck thick enough to rival a tree trunk. His arms and shoulders were well muscled, and gave him every appearance of strength.

Griffo was bought up in Sydney’s notorious The Rocks area and at a tender age was the leader of his own ‘Push’, the name given to the dozens of gangs that roamed the area. Always a small youngster, Griffo was gifted with unbelievable powers of timing, and reflexes so fast it is understood he could pluck a fly from the air.

Griffo’s almost legendary powers came to the attention of the great Larry Foley, the ‘Father’ of Australian boxing, for years one of the country’s best bare knuckle prize fighters, and the proprietor of a Boxing Academy.

The closest Griffo came to defeat in Australia was on December 20, 1892 when he staked his world title against Jerry Marshall at Darlinghurst, Sydney. The referee awarded the contest to an exhausted Griffo on a debatable points decision.

On May 15, 1893, Griffo sailed on the steamship ‘Alamenda’ to the United States where he was told a fortune awaited his boxing skills. He remained unbeaten as a featherweight or lightweight until his 115th fight when he lost on points to Jack McAuliffe, recognised as the world lightweight champion, but who entered the ring a full 6.5kg heavier than Griffo. After the fight, referee Maxie Moore admitted he had erred in his totaling of the points and that Griffo should have been crowned winner.

In a career in the United States which stretched from 1893 to 1911 Griffo fought the greatest fighters of his weight and often men six kilograms or more heavier, including George Dixon, Joe Gans, George Lavigne, Charlie McKeever, and Jack Everhardt.

Gradually his almost super human stamina was eroded by his liking for a lavish lifestyle. In his last recorded fight, he fought a no decision with Mike Leonard in New York on May 10, 1911.

He died on December 7, 1927, and is buried in New York. His full record will never be known. He fought a number of bare knuckle fights early in his career, but only two, including probably his first fight, a 3rd round knockout of Joe Francis have been documented.

In Griffo’s era many fights were recorded as ‘No Decision’ or ‘Draw’, when in fact Griffo had won on points. Such was his cockiness he would often bet he could knockout his opponent in a nominated number of rounds. If the hapless opponent had avoided a knockout, the fight would be stopped and a ‘No Decision’ or ‘Draw’ awarded. More importantly he was never defeated for either the world or Australian featherweight title.