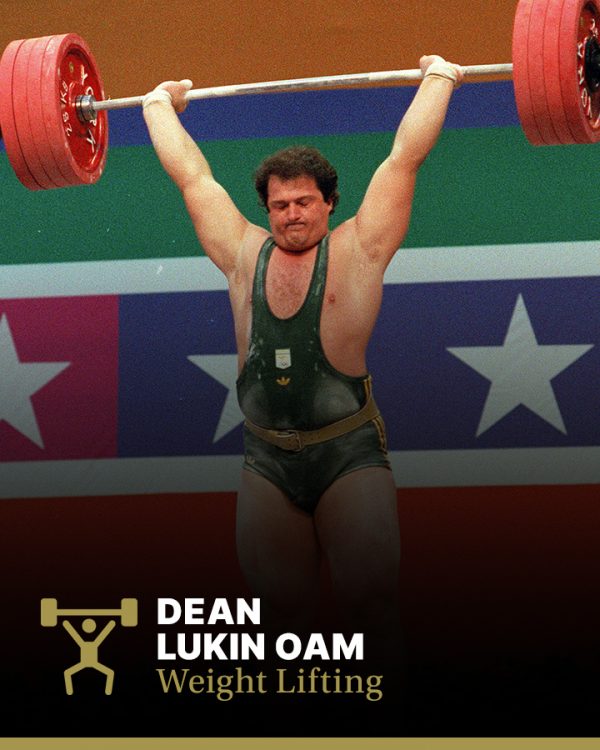 Dean Lukin OAM was inducted into the Sport Australia Hall of Fame in 1985 as an Athlete Member for his contribution to the sport of weightlifting.

Lukin remains the best-known weightlifter in Australian history and the only Australian to win an Olympic gold medal in the sport.

Lukin began weightlifting in 1976 and held all Commonwealth junior records. In 1980, he finished fourth in the World Junior Championships, second in 1981 and was ranked sixth in the world in the senior ranks the same year.

Upon leaving school at 17, he became a full time fisherman, spending months at a time at sea fishing for tuna in the Great Australian Bight. He trained for his event, the super heavyweight division of the weightlifting, mostly in a rusty old tin shed in his hometown of Port Lincoln, South Australia.

In his teens, he was persuaded to start lifting weights by his headmaster, Leon Holme. He won the schoolboy titles, represented Australia in world junior championships, and achieved distinction when he won gold in the super heavyweight division (110kg and over) at the 1982 Brisbane Commonwealth Games. However, he still regarded weightlifting as a pleasant diversion from his true calling, tuna fishing.

After winning the national title in October 1983, Lukin went after the tuna again for five months, rejecting entreaties from Holme, who was his coach, that he train full time for the Olympics. He gave himself a sixteen week preparation period for the 1984 Los Angeles Olympics, causing the national coach Bruce Walsh to protest, “What Lukin gets away with here wouldn’t be heard of in the Eastern Bloc countries”. Fortunately for Lukin’s prospects, and Australia’s, the boycott took out the top Russians, as well as champions from Bulgaria and East Germany. Instantly he became a gold medal prospect.

After the first round of the battle in Los Angeles, he trailed in third place, well behind his main rival, the American Mario Martinez. Martinez lifted ahead of him in the second phase of the contest, the clean-and-jerk, and when he finished, his total for the two lifts was 410kg. To overtake him and win Australia’s first weightlifting gold medal ever, Lukin needed to lift 240kg, 5kg more than he had ever managed before. At his first lift he hoisted 227.5kg, ensuring a silver medal. Then he elected to try for 240kg. He did the job perfectly, taking the bar that held the weight of two refrigerators, jerking it up, holding it aloft, and actually bouncing a couple of centimeters off the mat as he did so.

He celebrated in the early hours of the morning with a hamburger in a fancy restaurant, the proprietor refused payment. The next day Lukin was asked if he would compete in the Australia Games the following January, “Your kidding, that’s slap-bang in the middle of tuna season.”

In Sydney in 1985, Lukin created another Commonwealth and Australian record when he lifted 240.5kg in the clean-and-jerk and beat Martinez for the second time. His total lift was 400kg.

1985: Awarded the Medal of the Order of Australia for his services to weightlifting