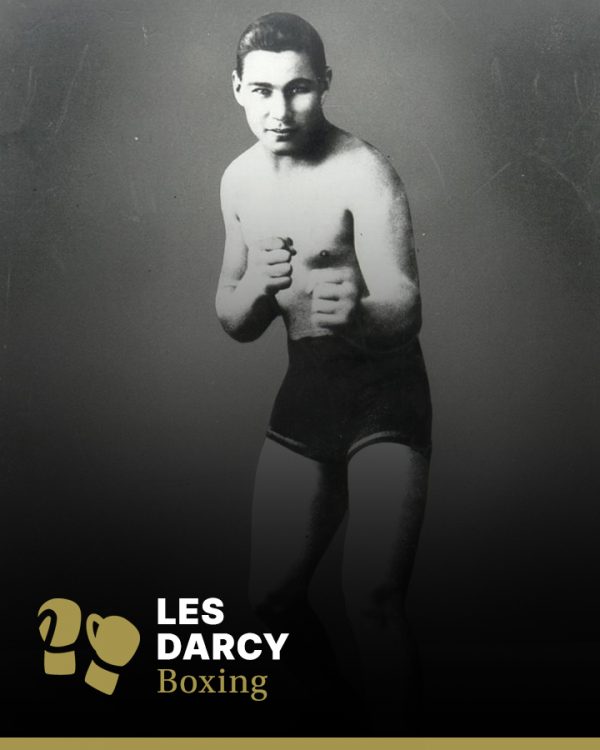 Les Darcy became an Australian sporting legend in a short but brilliant fighting career that came to an unglamorous end when he died far from home.

One of 10 children of an Irish Catholic family, Les Darcy quickly developed a love of boxing. He left school at 12 to become a carter and then a blacksmith’s apprentice. He learned his boxing in rough and tumble bare knuckle fights against other youngsters and had his first formal lessons from Mick Hawkins, later his trainer and closest friend. An apprenticeship as a blacksmith developed his physique and at the age of 15 had his first professional fight, winning by knock out in the second round and earning himself the princely sum of 15 shillings. While most other sport at that time was amateur, boxing was heavily promoted and there was money to be made.

He had an enormous following from Maitland and the coalfields and each new fight was awaited with eager anticipation. Young Darcy’s boyish personality and outstanding ability made him a national sporting hero, particularly among the Irish Catholic working class population. He was not recognised as world middleweight champion but he beat a series of American imports who included most of the best in the era. Although not tall for a middleweight, Darcy was amazingly strong.

From 1910 until 1913 Darcy remained undefeated in 17 fights. His first defeat came in his next contest when, only nine days after a bruising 20 rounder in which he injured both hands, he met the Australian welterweight champion Bob Whitelaw. Darcy was only 18 at the time and Whitelaw was a seasoned campaigner who had trained hard for what he knew would be a tough bout. Whitelaw won a disputed points decision but the loss made Darcy an even bigger hero on the New South Wales coalfields when his fights continually drew capacity crowds. In a rematch, Darcy knocked Whitelaw out in five rounds.

In 1914 Darcy won four straight fights, including a knockout win over Whitelaw in a return match, and was then rushed into a match with the highly rated American Fritz Holland at Sydney Stadium. Fritz was a man many considered a future world champion and Darcy lost narrowly on points. Then in a return match he lost on a foul. He was to lose only one more contest -another on a foul to wily American Jeff Smith in Sydney. In what was considered a contest for the unofficial world middleweight title, Darcy complained of a low blow at the end of the fifth round and the referee believed that Darcy did not want to continue, therefore awarding the decision to Smith. In a rematch, Darcy was awarded the victory when Smith punched him in the groin. After that, Darcy cut a swath through the best middleweights in the world. The list of other victims included Frank Loughery, Mick King, world championship claimant Eddie McGoorty, Jimmy Clabby, K O Brown, Australian heavyweight champion Harold Hardwick, Les O’Donnell, Buck Crouse, and George Chip, another claimant to the world title.

Darcy’s opponents are said to have admired his courage, stamina, and punching power. In 1916, Darcy KO’d Harold Hardwick to capture the Australian heavyweight title.

Darcy was Australia’s best known sportsman at the time Australia mobilised to join the Allied cause in World War I. In 1916 he was pressured to enlist in the Australian Army – the theory being that Les’s example would encourage more volunteers to sign up. However he was under 21 and his mother refused her consent. Public opinion turned against him. He escaped the mounting controversy on the eve of the 1916 conscription referendum by stowing away on an oil tanker, the S.S. Cushing, bound for New York in a bid to clinch an official world title, despite the non-issue of passports to men of military age, and was crucified by the media as a coward. He took US citizenship a year later. Darcy was misguided when he left Australia in 1916, claiming he was after some quick, big money fights in the US and that he would return to enlist immediately after he had secured the financial future of his family.

The Australian press was not interested that Darcy had promised to enlist in the Royal Australian Air Force and had offered a £1000 bond against his return from the US within six months. As the American press picked up the Australian newspapers stories, Darcy, once a super hero, found himself branded a coward. Banned by American boxing promoters, Darcy eked out a living by touring with vaudeville teams and finally decided to take out American citizenship in the hope he could secure fights. Darcy became an American citizen on April 5, 1917 and was finally offered a match against old foe Jeff Smith in Louisiana on April 23. When the Governor of Louisiana cancelled the fight, Darcy wrote to Snowy Baker of Stadiums Limited in Sydney asking for two tickets back to Australia where he would enlist. Baker never acknowledged the letter.

Broke and disillusioned Darcy finally had some good news. When a Memphis promoter asked the Mayor of Memphis for permission to match Darcy he was given an affirmative, provided Darcy enlisted in the US Armed Forces. Darcy immediately enlisted in the Signal Corps Aviation School and was given the rank of sergeant. His fight against well performed Len Rolands was scheduled for May 7 and on April 24 Darcy went into hard training. On April 27 he collapsed after a long run and was taken to hospital where doctors found he had infected tonsils which had caused blood poisoning and inflammation of the heart. Though his tonsils were removed, Darcy continued to deteriorate and contracted pneumonia on May 19. On May 24 Darcy died, nearly six months after he had arrived in New York.

His body was bought back to Sydney on June 26 and a huge crowd gathered in silence at Walsh Bay. More than 200,000 people jammed the streets of Sydney to witness the coffin carried to Central Railway Station for transportation to East Maitland. The press mellowed, then changed tune, and suddenly Darcy was again the national sporting hero.

As with so many other young Australians during the war years, Darcy’s death represented promise unfulfilled. Darcy fought 50 times, lost 4 and won 29 of his 46 bouts by knockout. Though never recognised in the US, Darcy’s two fights against Jeff Smith were billed as being for the world title as were two other fights against Mick King and Eddie McGoorty.