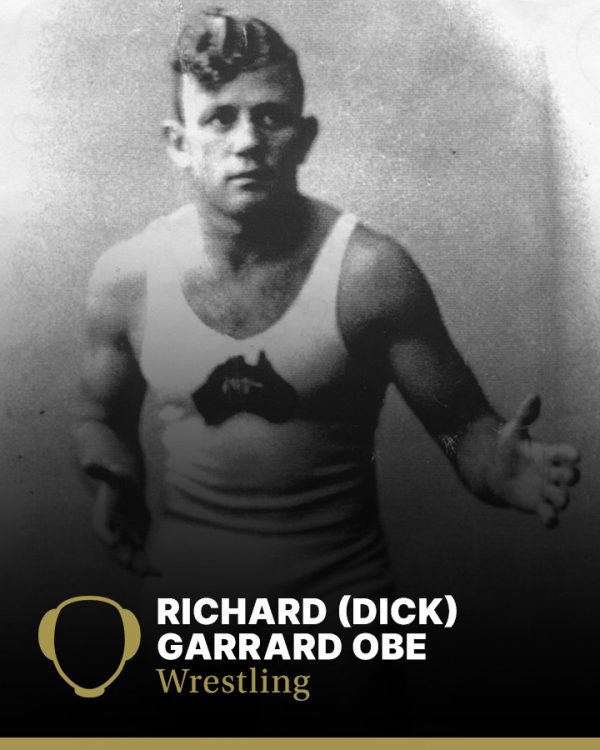 Dick Garrard is Australia’s most successful amateur wrestler. His career embraced four Olympics (competing in three), four British Empire and Commonwealth Games, and 525 bouts (for only nine loses), winning silver at the 1948 London Games, and three Commonwealth gold medals. Probably because he competed in a comparatively inconspicuous sport, Garrard’s career as Australia’s most successful amateur wrestler is all too often overlooked.

He was not beaten in a match in Australia for 25 years, winning the Australian and Victorian titles from 1930 to 1956 other than on a few occasions when he was competing overseas. His first international success came in 1939 when he won gold in the lightweight freestyle division at the Pan Pacific Games in Tokyo.

Garrard’s involvement with the Olympic Movement began in 1936, when he was selected to compete at this first Olympics in Berlin. The Australian wrestlers looked impressive, but had trouble coping with unfamiliar rules and questionable judging; at one stage, after Garrard lost a doubtful decision in the second round, six nations protested against three judges who officiated. There was no change to the result.

When the Olympics resumed after the war in London 1948, the Australian team was selected in order of priority. Garrard was the first male athlete named in the team. There, he won silver, becoming the only Australian wrestler to make an Olympic final. Competing then in the welterweight freestyle division, Garrard won his first four elimination matches but was beaten on points in the 5th contest by L Merrill of the USA, a decision which prompted a fierce debate not only among spectators but between the judges! Garrard then met Y Dogu of Turkey in the final round and after a marathon 6min 45sec match, lost by a fall to win silver. After the Games, he was presented to the Royal family at Buckingham Palace, London.

Four years later in Helsinki, he was again presented to the Royal Family at Buckingham Palace en route to the Games. He was selected for the 1956 Melbourne Games but was forced to withdraw due to a dislocated shoulder. However, it saw the start of his administrative career. He was made an international judge and referee as well as chairman of the Olympic Wrestling Technical Committee. From then until the 2000 Sydney Olympics (apart from the 1980 Moscow Games which he boycotted), Garrard was involved with the Olympics in some way, either as a judge and referee, Section Manager of the wrestling team, Mat chairman, a delegate to the Congress, or simply as a VIP.

He was elected to the FILA Bureau in Tokyo 1964, and in Mexico 1968, was made an Honorary Member. At the 1976 Montreal Games he received from the International Amateur Wrestling Federation the highest award received by an Australian for services to the sport, the Grand Cross. In Atlanta 1996, he received a Diploma of Honour from the FILA Bureau for services to wrestling over a period of 77 years.

In the British Empire Games, he won three gold and a bronze medal in the lightweight freestyle division, winning the event in 1934 London, 1938 Sydney, and 1950 Auckland. In 1954 Vancouver, he lost it on a split point decision, winning bronze, and was Australia’s flag bearer in the opening ceremony. As with the Olympics, he went on to be heavily involved in the administration side of the sport, being Section Manager, Mat Chairman, and sitting on various committees during the Games, attending every Games until the 1998 Kuala Lumpur Games.

Back in the 1920s, Garrard won competitive swimming events, was a foundation member of the Torquay Jan Juc Life Saving Clubs, being instrumental in saving over 20 lives. He represented Victoria at the 1946 national championships in Queensland and was the first Victorian to represent his state at an Australian surf carnival. He also represented Victoria at the Australian Pistol Championships in Canberra 1960, and Melbourne 1961. He also won a state weight lifting championship and later broke an Australian record.