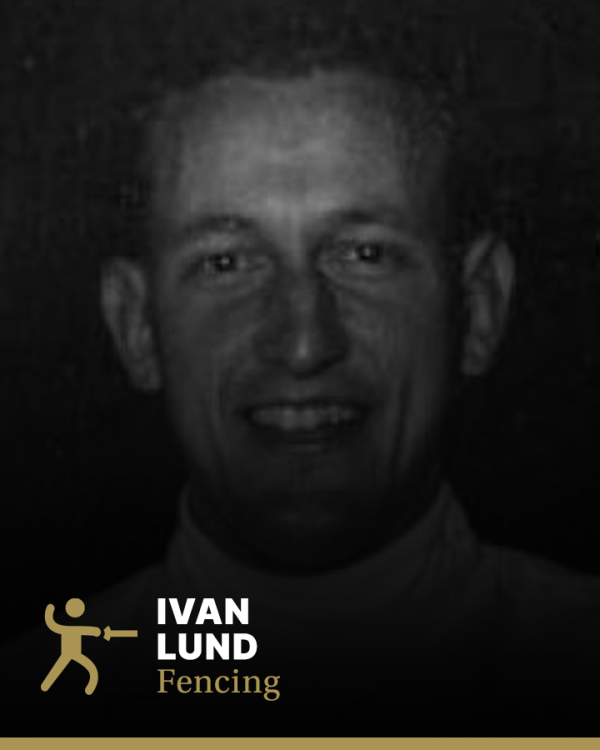 Ivan Lund was one of the few fencers to ever compete for Australia on the world stage. Lund dominated Australian fencing during the 50s, winning 11 Australian and 14 New South Wales foil and épée championships. He competed in four British Empire and Commonwealth Games from 1950 to 1962, winning a total of 13 medals, and competed in a then record four Olympics, 1952 Helsinki, 1956 Melbourne, 1960 Rome, and 1964 Tokyo, but never managed to make the final pool.

Another significant honour in Lund’s career was his appointment as flag bearer for Australia in both the opening and closing ceremonies at the 1958 Cardiff Games. He was also flag bearer in the opening ceremony of the 1964 Tokyo Olympics. At the 1962 Perth Games he gave the oath on behalf of all competitors at the opening ceremony. At the 1960 Rome Olympics he was selected to give a presentation to Pope John IXX on behalf of all Olympic athletes, of a statue of St John Bosco, the Patron Saint of Sportspersons, at the open air ceremony in St Peter’s Square, Rome, in front of about 100,000 people.

Lund’s career also extended to significant administrative involvement, as the Sectional Manager of the fencing team at the 1966 Kingston (Jamaica) British Commonwealth Games, and the administration officer for the Commonwealth Games headquarters staff in Edinburgh in 1970 and New Zealand in 1974.