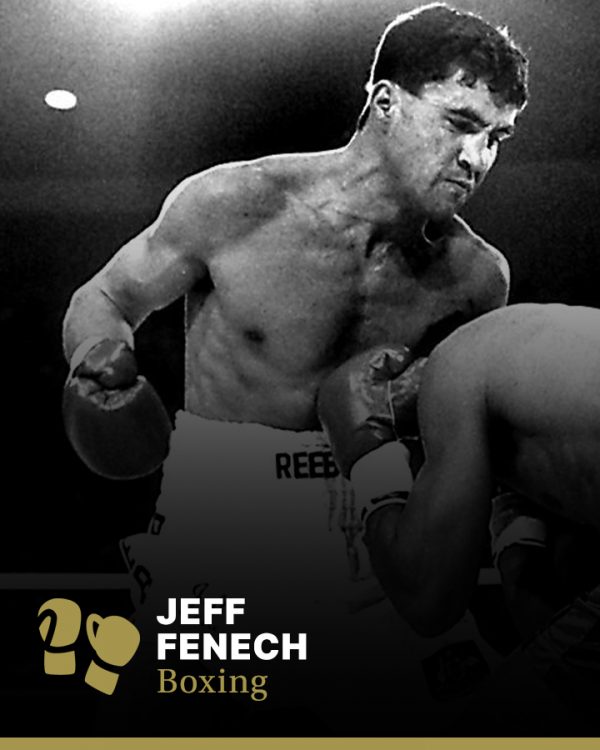 Jeff Fenech was inducted into the Sport Australia Hall of Fame in 1986 as an Athlete Member for his contribution to the sport of boxing.

Jeff Fenech compiled one of the most outstanding international records in the modern history of Australian boxing. Nicknamed the “Marrickville Mauler” early in his career, Jeff has an extraordinary four world boxing titles to his credit – in four different weight divisions, his fourth title being retroactively awarded thirty years after the controversial decision in 1991. Fenech joined a select group of boxers to have won world boxing titles across four weight divisions.

Growing up, Fenech was a keen rugby league player. He was fast and a good tackler, but was too light for senior football, so at age 17 he found his way to the Newtown Police Citizens Youth Club run by Johnny Lewis. Lewis became his mentor and manager and provided Fenech with fatherly reassurance and shrewd tactical and business advice. Fenech benefited greatly from the advice of Lewis, and in fact did not lose a fight, amateur or professional with Lewis in his corner.

As an amateur boxer he had considerable success including, boxing overseas in the 1983 Rome World Cup and winning bouts in the King’s Cup in Thailand, before he punched his way to the captaincy of the Australian Olympic boxing team that competed at the Los Angeles 1984 Olympics. At the LA Olympics he suffered a major disappointment when he was the victim of an overturned decision in the quarterfinal. The officiating judges awarded him the fight 3-2, but a nine-man jury reversed this later and the decision was given to his opponent, the Czech boxer, Zepovski.

Fenech was bitterly disappointed with the result turned professional on his return to Australia. On October 12, 1984, he won the Australian super-flyweight title in his third professional fight. He then moved up a weight and took the New South Wales bantamweight title.

April 26, 1985, saw Fenech defeat Satashi Shingaki in the ninth round of what was his seventh fight just six months as a professional to claim the International Boxing Federation bantamweight title, becoming world champion. Fenech was suddenly a national hero. He then defended the title against Shingaki in Sydney, on August 23, 1985. This time he stopped Shingaki in three rounds. Fenech’s next title defence came in Sydney in December 1985 when he beat American Jerome Coffee on points, before he knocked out Coffee’s countryman, and 1984 Olympic gold medalist in Fenech’s division, Steve McCrory in 14 rounds to again come away with his title intact after their fight in July 1986.

After several impressive wins against highly rated boxers, Fenech took nine months off from boxing because of injuries to his fists.

In 1987 Fenech returned to boxing and claimed the Australian featherweight than defeated Thailand’s Samart Payakuran to win the WBF super bantamweight championship. He defend his title successfully the same year against Greg Richardson, and the legendary Mexican fighter Carlos Zarate. The following year he survived a bone-rattling uppercut from Puerto Rican Victor Callejas to score a tenth round knockout and take his third world championship, the WBC featherweight crown. In two other bouts the same year he successfully defended his title against Tyrone Downes and Georgie Navarro.

Soon after his title defences, Fenech took a brief hiatus from boxing and turned his hand back to rugby league where he managed a handful of second grade games for Parramatta, before he returned to the ring and defeated Mexican, Mario Martinez in November 1989. In the same year, he retained his title against Marcos Villasana.

After another enforced break to allow his hands time to recover from injury, Fenech returned to the ring in 1991 and challenged the famous Azumah Nelson for the WBC lightweight championship. The fight was staged in Las Vegas in June on the undercard for Mike Tyson vs Razor Ruddock, and the result was thought by many at the time to be a farce. Fenech appeared to have won easily on points, however, the split decision of the judges resulted in the fight being declared a draw, and Fenech’s dream of winning four world titles was dashed.

Within 12 hours, a re-match was negotiated. He met Nelson for the title again in Melbourne in March 1992. Fenech was affected by a pre-fight injection in his injured right hand was stopped in the eighth round. It was Fenech’s first loss in 28 fights.

30 years later in 2022 at the World Boxing Council (WBC) convention Fenech was retroactively awarded the win for his 1991 Las Vegas fight, giving him his fourth world title after a panel of judges reviewed the fight, resulting in Fenech being declared the winner, the WBC board of governors endorsed the result to crown Fenech with the title.

After the rematch, Fenech took an extended break from boxing before returning to the ring in Melbourne in June 1993 when he lost by knockout to the brilliant gloveman, Calvin Grove. Shortly after, he announced his retirement, but made a shock comeback in late 1995 and easily won two more fights, before he met South African Philip Holiday in Melbourne for the IBF lightweight championship in 1996. Unfortunately, Fenech was outclassed, and the fight was stopped in the second round. This time, Fenech retired from the ‘Sweet Science’ for good.

Across his incredible career, Fenech fought 32 times for a total of 28 wins (21 by KO), one draw* and three losses.

In retirement, Fenech kept his mind busy with a career with the Australian Sports Commission, and involvement with amateur boxers with career aspirations to represent Australia in future Olympic Games. He also co-hosted Sky Channel fight nights and conducted interviews with boxers internationally. He is the owner of a sports clothing brand that carries his name in Australia and has become a trainer. He’s trained fighters such as Nedal Hussein, Hussein Hussein, Sakio Bika, and former IBF flyweight champion Vic Darchinyan. In March 2005, Fenech trained former heavyweight champion Mike Tyson, in an effort to relaunch Tyson’s career and throughout 2020, the pair worked together once again in preparation for Tyson’s exhibition bout against Roy Jones Jr.

*This 1991 draw was later re-scored and Fenech was declared the winner thus taking his career tally to 32 fights, 29 wins, 3 losses.