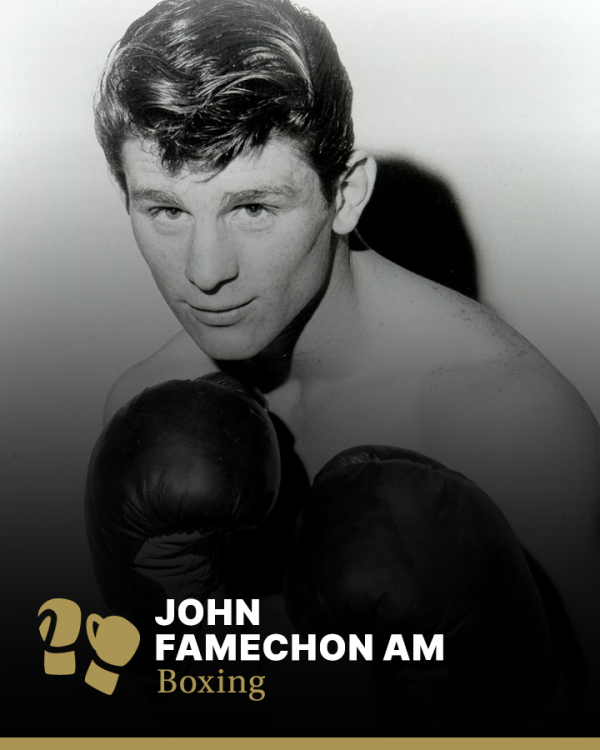 Jean-Pierre ‘Johnny’ Famechon AM was inducted into the Sport Australia Hall of Fame in 1985 for his contribution to the sport of boxing.

Famechon, who fought during the golden period of Australian boxing, became Australia’s third world boxing champion. He was champion of the world at the same time as Lionel Rose, when boxing in Australia was enormously popular. Over his 10-year career he became known as a tough fighter, with a career record of 56 wins (20 by KO), 6 draws and 5 losses. With silky defensive skills, he was nicknamed ‘poetry in motion’ and his deft craftsmanship exemplified why boxing could be called the sweet science.

Born Jean-Pierre Famechon in France, he moved to Australia in 1950 aged 5. His father Andre was a French lightweight champion and his Uncle Ray was French and European featherweight champion before fighting the great Willie Pep for the world title. Famechon enrolled at Ambrose Palmer’s gym in Melbourne and at 16 had his first professional fight.

His early career was distinctive in that he never boxed as an amateur. Under the tutelage of Ambrose Palmer throughout his career, he started in June 1961 with a three-round draw. His first major win came in 1964 at the age of 19 when he beat Les Dunn for the Victorian featherweight title. He won the national title the same year, beating Ollie Taylor. Next step was the Australian title, which he defended three times. The progression continued with the Commonwealth featherweight title, defeating Scot Johnny O’Brien in 1967.

Now with a solid 58 fights under his belt, Palmer teamed ‘Fammo’ up with famed British promoters, Mike Barrett, and Mickey Duff. A match was made against classy Cuban Jose Legra for the world featherweight title at Albert Hall in London on January 21, 1969. In a very tough encounter Famechon out pointed Legra to become the champion of the world.

Next, he defended his crown against former world flyweight and bantamweight king, the tough-as-nails Fighting Harada of Japan in July 1969 at Sydney Stadium, in which the referee Willie Pep initially declared the fight a draw, then controversially awarded it to Famechon. Any doubt was removed six months later however, when Famechon knocked Harada out in the 14th round, in a Tokyo rematch. Fammo called it a day upon returning to Australia in May 1970 after he surrendered the title to Mexican Vicente Saldivar in a close contest. The fast-moving clever boxer never fought again.

In 1991, he suffered a stroke and Acquired Brain Injury, and was in a coma for 10 days, after being hit by a car whilst jogging near Sydney’s Warwick Farm racecourse. Two years after the accident he started a special rehabilitation program that returned him to near full health. His fight to return to full health showed ‘Fammo’ did not leave his fighting spirit in the ring.

John Famechon passed away on August 4, 2022. His sharp wit and ready smile always inspired those around him, and not once did he claim life had treated him badly.