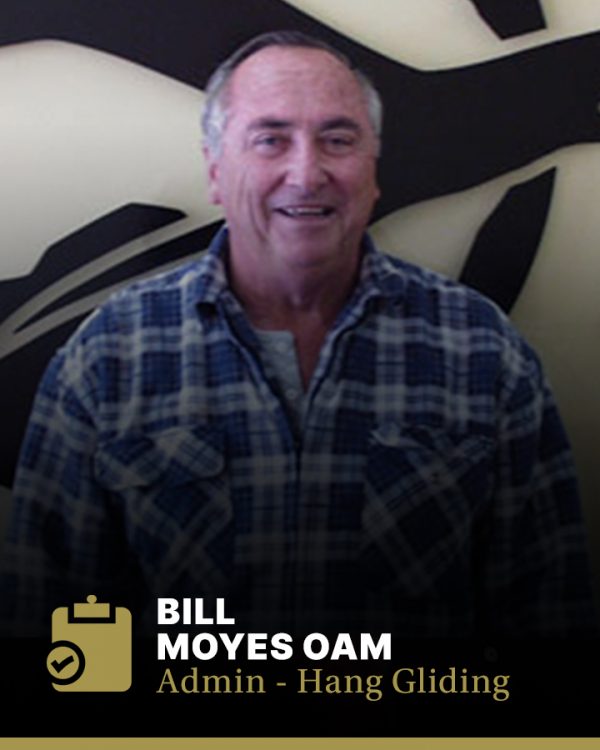 Like his visionary antecedents, Bill Moyes dreamed of free flight. From boyhood he watched the gulls floating effortlessly on the air and developed a passionate longing to join them. At long last, man’s oldest dream was to take substance and literally soar.

At first, using speed boats as the source of motion, Moyes developed a ‘kite’ that was to lift him into the record books. Carefully refining his concepts as he proceeded, Moyes was able to achieve stable, controllable personal flight for the first time in history. His death defying daredevilry now thrilled capacity crowds across several continents at shows and exhibitions. A major sport was born.

Over the next few years, Moyes made hundreds of boat-towed launches, pioneering the fledgling sport. In 1967 he foot launched from Mount Crackenback and flew three kilometres. He became the first man to tow to 1000 feet, in 1969 he was the first man to soar, staying aloft at La Perouse for 32 minutes. In the same year, he boat towed to 2870 feet over Lake Ellesmere in New Zealand.

1970 saw Moyes boat towed to 8610 feet in Wisconsin, USA. Later that year, he became the first man to glide into the Grand Canyon. Returning to Lake Ellesmere, he towed to 4750 feet in 1972.

The ‘Australian Birdman’ quickly caught the imagination of the world. He had done what countless people before him tried to do and failed. Moyes soared into the history books by applying his mind to the unsolved problems left by the great minds of the ages. With the benefit of modern materials and advanced aerodynamics, Moyes produced the world’s first truly successful hang glider.

Other Awards and Honours:

In 1998 Moyes was awarded the Medal of the Order of Australia (OAM) for service to hang gliding as a manufacturer and as a promoter of competition and the use of safer equipment and techniques.