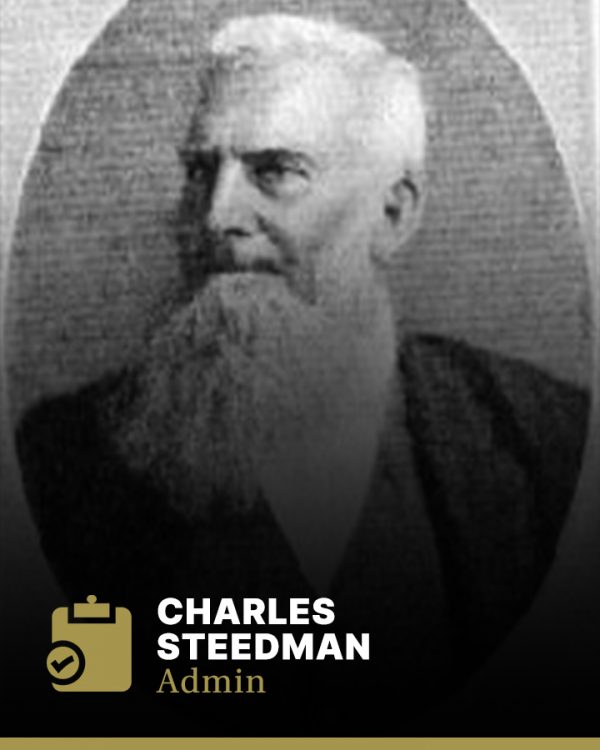 In 1867, when Charles Steedman’s Manual of Swimming was published in Melbourne, it marked the beginning of swimming’s modern era. Steedman’s 270 page work contained the first descriptions of racing strokes and how to train. Unlike earlier works on swimming, this book was written by a champion swimmer, able to speak with the authority of practical experience. It was the first major technical contribution to the new sport of ‘speed swimming’, and a London edition six years later made it internationally popular.

Because Steedman’s book was based on practical experience, details of his swimming career are noteworthy. He was champion of England in the early 1850s when England was the world’s leading swimming country.

He was self-educated and excelled at everything he set out to do. At the age of 11 he began as a mapmaker, coloring maps. Two years later, he was a chemist’s assistant. At 14, he apprenticed to a cabinetmaker and attended evening classes to learn grammar and mathematics. At 19, he became a piano-maker, where his newfound knowledge of mathematics enabled accurate measuring and fitting of the spruce sound board. So successful was he in his new craft that he was said to be “proud at having to pay income tax”, a fact that enabled him to vote (at the time, the so-called “working classes” were not entitled to vote, unless they earned enough to be taxed.)

Steedman only learned to swim at the age of 13, but his talent was such that by 1845, at the age of 15, he was a professional swimmer who had already won the then princely sum of £10 in a race over 400yds, the longest racing distance in those days. At 19, he won the championship of England from G Pewters, a master of the sidestroke, the new racing style of the day. Competitions were infrequent in those days because most races were staged encounters between two matched opponents.

Although a professional swimmer, Steedman had a full-time job and could only train after an arduous 10 hour working day. Nevertheless, in 1852 and again in 1853, he beat Frederick Beckwith, nine years his senior, for the Surrey Club Championship, the event commonly regarded as the Championship of England. Beckwith declined to swim against Steedman again.

Steedman immigrated to Australia in July 1854 “to see something of the world”, and arrived two months later in Port Phillip Bay after a voyage attended by hardship, discomfort, and danger. Most of the time was spent in the latitudes of the ‘roaring forties’ where the waves were terrifying and said to be the highest in the world. In congested conditions, Steedman spent many weeks at sea.

Steedman’s arrival in Australia caused considerable interest among local swimmers because he was the swimming champion of England. He became swimming’s first internationalist when he shared England’s more advanced knowledge of the sport with his new countrymen.

Practical by nature, Steedman thought it important to have a full time job, and soon he was earning his living as a skilled piano maker. Always seeking to advance himself, he learned Latin and Greek, and became a schoolmaster as well as a journalist. He became champion of Victoria, and there published the first book on speed swimming.

As a respected member of the new Melbourne colony, his book was well received. “Manual of Swimming” (1867) was the world’s first technical book on “speed swimming” and marked the beginning of swimming’s modern era.

As swimming’s first internationalist, Steedman’s “Manual”, as it was colloquially referred to, became the world’s first reference to bathing, plunging, diving, floating, scientific swimming, training, drowning and rescuing written by an accomplished swimmer using available sound, scientific methods of the day to authenticate his beliefs.

In the introduction of the book, Steedman said that there was “no comprehensive book in English” on the subject of swimming. He mentioned the fact he had “attained the honorable position of champion swimmer both in England and Australia, and had maintained that position for several years” and “was sufficient guarantee” of his “knowledge and mastery of the subject” that he undertook to teach.

Steedman wrote, “The ability to write well and to swim well are two distinct qualifications, which appear never to have been combined in one individual in an eminent degree. There has been no lack of essays on swimming by excellent writers, but who were not swimmers. The present written work by a practical swimmer, who makes no pretensions to literary and scientific merit, it is trusted will be found more useful, if less ornamental, than the essays of superior writers on the same subject.”

Large sections of the ‘Manual’ are devoted to the need to bathe regularly, and how to rescue drowning people. This was because few people at that time washed, and few people could swim. It was obvious to Steedman that, before people could be encouraged to learn to swim and become safe in water, they had to be encouraged to like water. Steedman mentioned the high rate of drowning, and how the skilled swimmers of the day each saved a large number of people from drowning. Steedman, had 66 saved lives to his credit.

As a scientist, he used mathematics as a means to derive better speed results. “A rapid swimmer will have to exert an effective power equal to the cube of the power exerted by the other; hence the fleet swimmer, because of his greater expenditure of power, and because of the greater resistance he meets with as a consequence of that expenditure, cannot proceed in the water at a speed more than about double of that of the slow swimmer.”

He describes the North American Indians as swimming with an alternative continuous arm action which was a type of crawl stroke, predating a subsequent reference by at least 30 years. “Crawl” was the 19th Century term used to describe the dog paddle, as we know it today.