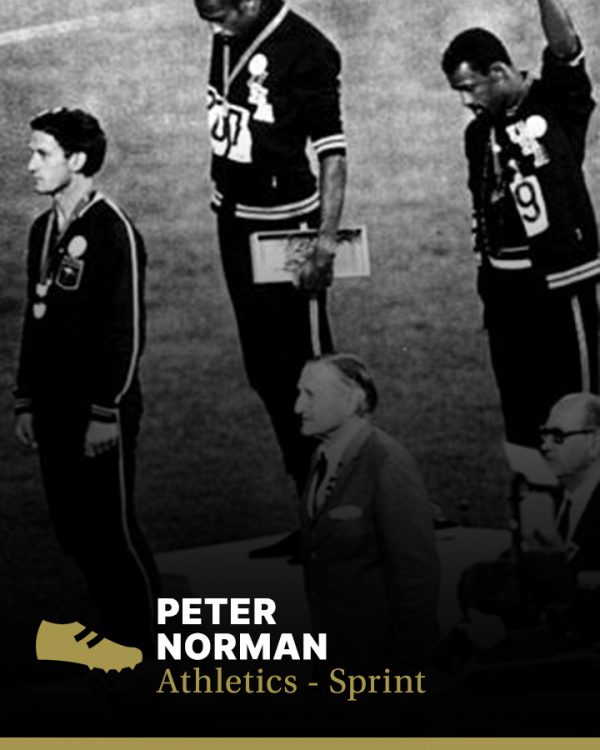 Peter Norman was inducted into the Sport Australia Hall of Fame in 1999 as an Athlete Member for his contribution to the sport of athletics.

Norman ran for the East Melbourne Harriers Club which dominated sprinting in the 1960s in Victoria. However the defining moment in his career was at the 1968 Mexico City Olympics, where he won silver in the 200m, becoming a part of sporting history in one of the most controversial medal ceremonies.

Two Americans, Tommie Smith, and John Carlos used their presence on the victory dais after the 200m final to make a political gesture. With clenched, black gloved fists, they raised their arms in black power salutes as the American flag was raised and ‘The Star Spangled Banner’ played. Smith had won gold, and Carlos the bronze. Peter Norman, a Salvation Army member and schoolteacher from Melbourne, had separated them at the finish.

In winning the silver medal, he did better than any Australian male sprinter in history: the bronze medallists Stan Rowley (1900) and Hec Hogan (1956) remain the only other place getters in events up to 200m.

Earlier in the year, Norman had won the third of his five national championships over 200m. When he arrived in Mexico City, he had never bettered 20.5 seconds for the 200m, although he ran some remarkably fast times on the Olympic village track, he was given little hope in a race which most saw as a private duel between Smith and Carlos. In the first round Norman shocked everyone by setting an Olympic record of 20.2 seconds. The two Americans won the semi-finals in 20.1 seconds but Norman galloped home only a tenth of a second behind Carlos. In the final, Smith took the lead with 60m to go, and crossed the line with arms raised. As Carlos turned his head to watch him go by, Norman, who had been in sixth place entering the straight, slipped past him to lunge for the line and take silver. His time was recorded electronically as 19.97 seconds, which converted, in those days of one decimal point times, to 20.0 seconds.

When the place getters boarded the victory dais, all three wore civil rights badges, and by mutual agreement they did not shake hands. Smith and Carlos were shoeless, and each raised a black-gloved fist during the anthem. Later they explained that the fists symbolised black strength and unity, and the feet were a reminder of black poverty in the United States. Olympic officials were outraged. The IOC let it be known that it felt they should be punished and the United States Olympic Committee suspended them both, ordering them to leave the village. Norman let it be known that he felt some sympathy for the views of Smith and Carlos, saying: “I believe in civil rights. Every man is born equal, and should be treated that way.”

The AOC awarded Norman a posthumous Order of Merit for his Australian record in the 200m sprint that remains the benchmark 50 years on (as at April 2022).