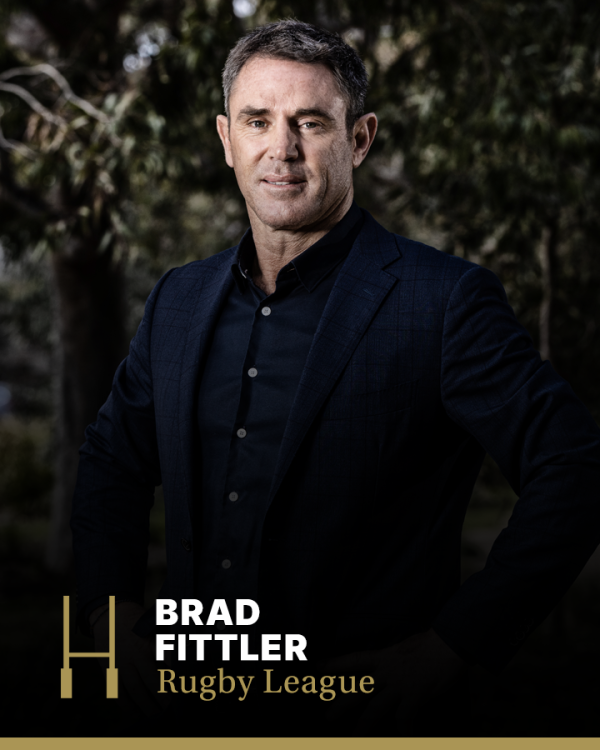 Brad Fittler was inducted into the Sport Australia Hall of Fame in 2022 as an Athlete Member for his contribution to the sport of rugby league.

One of the most durable, resilient and attacking players of his generation, Brad Fittler transformed from teenage young gun to inspirational team leader at club, state and international levels across a glittering 16-season career.

His NRL career comprised 336 games and 122 tries for Penrith Panthers and Sydney Roosters, winning premierships for both teams (1991 and 2002) as he became one of the greatest five-eighths to play the game, as well as time spent in the centre and lock.

Fittler’s connection to representative rugby league at State-of-Origin and Australian levels was significant, as he played for and captained both New South Wales and the Kangaroos.

He played for the Blues on 31 occasions, leading them 14 times for eight memorable wins. He led his country in 20 of his 40 matches, guiding the Kangaroos to the 1995 and 2000 World Cup titles, as well as being a member of the victorious 1992 side.

Fittler was adjudged the 2000 Golden Boot as the best player in the world and he would be inducted into the National Rugby League Hall of Fame in 2018 after being named as one of the NRL’s 100 Greatest Players in 2008. He would also have a successful coaching career at club and State-of-Origin levels.

Brad Fittler was “destined for stardom by virtue of his rare football talents”, according to one newspaper, when the schoolboy made his rugby league debut for Penrith Panthers in 1989.

By the time he had closed his decorated and much admired playing career in 2004, helping to close out a New South Wales State-Of-Origin success in the process, he would be acclaimed as one of the greatest rugby league players to have ever played the game.

His career was one of stunning successes at three different levels – in a two-club National Rugby League journey with Penrith and Sydney Roosters, as a player, captain and later coach of New South Wales in the cauldron of State-Of-Origin football, and as a player and captain of Australia taking on the rest of the rugby league world.

Fittler became known for his line-breaking side-step, a trademark that was feared and revered, depending on your allegiance. He was an outstanding five-eighth, who also spent time as a centre and later as a lock, who possessed extraordinary balance and agility, but who was also durable and tough, capable of playing through injury when others might not have.

He played in a losing Grand Final team in his second season in 1990 and in the same year represented New South Wales (at 18 years and 114 days) and Australia (at 18 years and 229 days) before playing in Penrith’s 1991 premiership success a year later.

Fittler’s switch to the Sydney Roosters at the end of the 1995 season made him the highest paid player in the competition at the time.

A second National Rugby League title would come with Sydney Roosters in 2002, this time with him as captain. It was the same year that he won a third Dally M Five-Eighth of the year.

Fittler won three Rugby League World Cup titles – the first as member of the squad in 1992 and two more as captain of the Kangaroos in 1995 and 2000.

Following that last success, in 2000, he was also awarded the Golden Boot – an award judged by UK magazine Rugby League World and presented annually to the player considered the best individual in world rugby. He was capped 40 times for Australia and was captain of the team in 20 Tests for 17 wins.

Fittler’s State-of-Origin contribution to New South Wales spanned 31 matches across 15 seasons. He was captain of the Blues on 14 occasions for eight wins, revelling in the combative, high-intensity clashes against the Queensland Maroons.

His status as an Origin legend was sealed when he made a stunning return for New South Wales after a three-year break following a late call-up from Phil Gould, as he spearheaded a 2-1 series win with a match-winning try.

He summed up the moment, saying: “Everything comes down to memories, and not everyone gets ones like that. It was such a big audience and atmosphere and an occasion like Origin just made it all the more exciting.”

He got the Origin fairy-tale farewell, but it didn’t go his way in his final NRL match – the 2004 Grand Final – when the Roosters were narrowly beaten. He retired with the second highest number of NRL first grade games to his credit – 336 games.

But Fittler’s contribution to the game was far from over at the end of his playing days. He embarked on a coaching career that included four seasons with the Sydney Roosters and in 2018, he coached the New South Wales State-of-Origin team to its first series win since 2014 and repeated this success in 2019 and 2021.

He was named as one of the 100 Greatest Players to mark the code’s centenary in 2008, a fitting tribute to the man affectionately known as ‘Freddy’. Fittler was inducted in NSWRL Hall of Fame in 2017 and National Rugby League Hall of Fame in 2018.