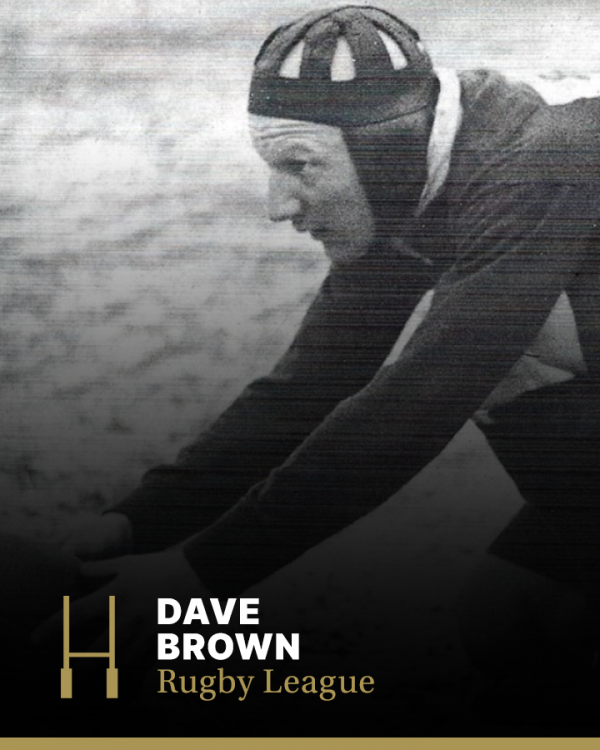 Part of the all-conquering Eastern Suburbs team of the 1930s, Dave Brown was a prominent figure in the game, breaking numerous point scoring records throughout his career. Be it tries or goals, his talents were exceptional – an outstanding centre, ball player, defender and kicker.

He possessed an uncanny ability to read play ahead of others. Described as ‘the Bradman of League’, three of his records still stand today; 285 points on the 1933/34 Kangaroo Tour from 19 tries and 114 goals, his 38 tries scored in the 1935 season for Eastern Suburbs, and his 45 points scored in a club game in 1935. It’s doubtful that these records will ever be broken as there were only eight teams in the Sydney competition and only 14 games a season in which he could tally up the points.

Born in the Sydney suburb of Hurstville in 1913, Brown began his sporting career while at Sydney’s Waverley Christian Brothers’ College playing rugby union. Before long he decided to establish a career for himself in rugby league and in early 1930 signed on to the Eastern Suburbs club.

It is little known that Brown played his rugby league under a serious handicap. As a child he lost the top of his right thumb while he was playing around with a lawnmower. Then at Waverley College he suffered a shocking arm injury playing football, badly damaging ligaments and nerves in his elbow. The injury cost him the use of two fingers on his right hand. Still he handled the ball perfectly in attack and his defence was first class.

An excellent cricketer and surfer, Brown joined Eastern Suburbs as a 16 year old school-boy, and by the end of the 1931 season he had established himself as the number one centre in the game. Brown was struck down with an illness late in 1931 and lost all of his hair and for the rest of his football career he wore distinctive leather headgear. Brown captained Easts at 18, New South Wales at 19 and Australia at 22 (on the tour to NZ). He played nine Tests (scoring 73 points) for Australia including all three against England on the 1933/34 Kangaroo Tour. While on that tour, he set an all-time record of 285 points, a record that still remains unbroken to this day.

From 1932 to 1936 under Brown’s captaincy, Eastern Suburbs became the dominant team in the league competation, winning the minor premiership on three occasions (1935, 1936, 1937) and winning the league twice. It was during this time that Brown set the record of scoring 38 tries in the 1935 Sydney competition season. That season, he also set the most points in single game record (45) against Canterbury which Easts won 87-7 in Canterbury’s first season in the Sydney premiership.

In 1936 Brown captained Australia for the first time against the touring Englishmen and at the end of the season he shocked Australian rugby league fans when he announced he was moving to Great Britain. He accepted a four-year contract to play for Lancashire club Warrington for a record fee of £1000.

He was an immediate success in England and a favourite with the crowds. During his stint in England he kicked possibly the best goal of his career in a Cup semi-final against St Helens. With the scores at two all in the dying moments, Warrington were awarded a penalty near the touchline and five-yards on their own side of half-way. Brown pleaded with the Warrington skipper to allow him to take the shot at goal. Brown steered the kick straight between the posts to give Warrington a 4-2 win and a spot in the Cup final.

He returned to Australia in 1939 and continued to play for Eastern Suburbs. He was appointed captain-coach of the Tri-Colours in 1940 and he immediately led the club to a premiership. Brown retired at the end of the 1941 season after Easts lost to St George in the grand final. He had played 85 games for Easts and 19 games (scoring 120 points) for NSW.

Following his retirement, Brown helped pioneer the coaching of youngsters and the education of coaches and became a rugby league school liaison officer. He promoted the code in South Africa for six months in the early 1960s adding to a lifetime of service he gave to rugby league.

A revered figure throughout the rugby league world, Brown’s modest demeanour as much as his freakish ability commanded him a special place in the hearts of all league fans. When he died in 1974 tributes flooded in from sportsmen all over the world.

Until the introduction of the ‘Clive Churchill Medal’ in 1986 for the best grand final player, the award was known as the ‘Dave Brown Medal’.