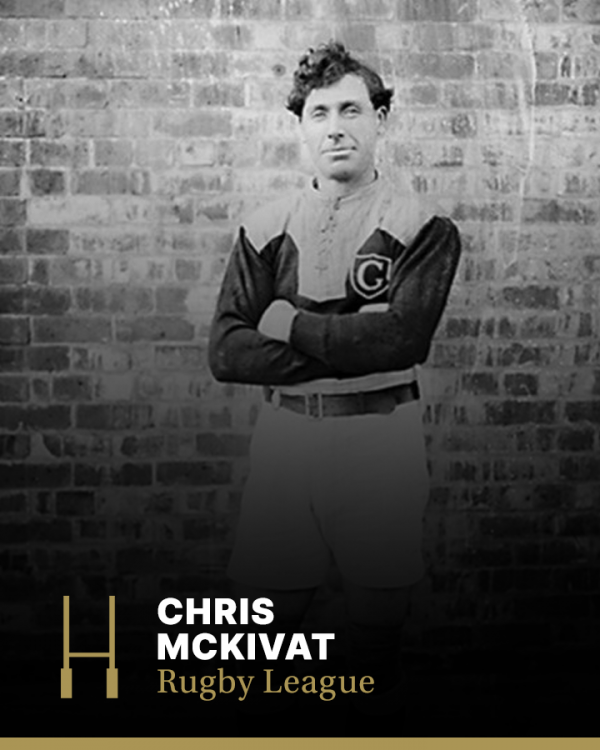 The Cumnock (New South Wales) born Chris McKivat had one of the most incredible football careers of any Australian. He began as a rugby union player in the central west of NSW and was selected in the NSW side to tour New Zealand in 1902 but declined the offer. In 1905 he moved to Sydney to join the Glebe club, winning NSW selection against Queensland in his first season.

In 1908 he was picked in the Australian Wallaby team to tour England, and when the captain, Dr Moran fell ill, was appointed Australian captain, leading the side in 17 of its 31 matches.

One of the matches was against English club side Cornwall in the 1908 London Olympic Games. McKivat led Australia to a 32-3 win and a gold medal. Three countries were to compete – Australia, Britain and France. The French withdrew, and Britain, instead of selecting a national team, chose to be represented by the previous year’s county champions, Cornwall.

That same year the first Australian rugby league team toured England, and when both sides returned to Sydney, McKivat was among a number of rugby amateurs who accepted $200 to play three matches against the league professionals. McKivat led his amateur team to win both matches. Along with his teammates, he was suspended by the NSW Rugby Union for accepting money to play, and immediately switched to league.

In 1909 McKivat joined the Glebe league team, played under Dally Messenger in the Australian team against England in 1910 (scoring three tries), and when Messenger became unavailable, McKivat was appointed Australian captain of the Ashes tour to England in 1911. The Australians were unbeaten and McKivat was hailed then, and for many years afterwards, as Australia’s greatest captain. He proved himself an ‘iron’ man by playing 32 of the 35 games.

He was a resourceful player and an inspiring leader but at all times, unselfish. The only time McKivat was known to cling to the ball was in a game in England in which the first try getter for the Australian was to be given an overcoat by a local firm. From an early scum in the opposing 25, McKivat was determined to make that overcoat his.

172.7cm tall and weighing 79kg, McKivat was an inspiring leader, and later, coach. He retired after the 1911 Ashes tour and in 1921 and 1922 coached the North Sydney team to two successive league premierships. He remains the only player to captain both a league and union team.